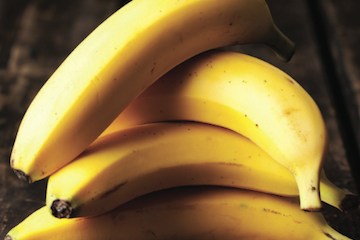 “People were already paying more for organic bananas at our competitors,” recalls Bérubé, merchandising manager at Sobeys Quebec since 2004. “So we added both organic and fair trade bananas to our lineup.”

A decade later, that decision is bearing fruit. After years of slow growth and provision issues, sales of fair trade bananas have ripened at Sobeys’ IGA stores in Quebec.

From 12 pallets a week in 2014, when Sobeys inked a deal with Equifruit that made the Montreal fair-trade firm its sole supplier of fair trade organic bananas, volume increased to 20 pallets in 2015, and to 30 by March of this year. That’s despite fair trade bananas being priced some 50% higher than conventional bananas.

“Demand has really taken off,” says Bérubé, who credits growing public awareness of the global fair trade movement and better in-store visibility from new racks for the boost. “We can’t take them out of our stores now,” he says, explaining customers would complain.

But will fair trade bananas become as common in stores as, say, fair trade coffee? Yes, if other countries are a bellwether.

According to Fairtrade Canada, which works to get a better deal for farmers and workers, fair trade bananas represent less than 1% of all bananas sold in Canada.

That pales in comparison to Europe, where one in every eight bananas sold in Switzerland and one in every three in the U.K. is fair trade.

One obstacle to higher sales is price. At a Whole Foods in Toronto, fair trade bananas were recently marked $1.09 a pound—hefty given regular ones were going for 69 cents in other stores.

True, fair trade bananas come with social justice and environmental perks. But nutrition and taste is the same, so paying more can seem to some like a charitable donation, says Ken Wong, an associate professor of marketing at the Queen’s University Smith School of Business.

“The retail business ultimately comes down to cost and competition,” Wong says.

“The market is growing exponentially,” she says. Bananas are now the fastest growing fair trade fruit in Canada, having overtaking avocados, grapefruits and pineapples.

“More Canadians are conscious about what they are buying,” says Jennie Coleman, owner of Montreal-based Equifruit. Still, sometimes customers need help, so Equifruit has made in-store banners for banana displays that read: “Choose this banana and change the world.”

“We’re conditioned to think of bananas as the cheapest fruit in the basket,” Coleman says. “But the reality is that bananas are highly nutritious and sensitive fruit that are packed and shipped thousands of kilometres to our stores. There are economic and human costs involved.”

One buyer of Equifruit’s fair trade bananas is the Big Carrot, a natural food market in Toronto.

“Customers love them, I love them,” says Chris Cascanette, produce manager. The store’s shoppers snap up two skids (or eight dozen 40-pound cases) of the bananas each week.

“We’re not making that much on them at $1.29 a pound, which is a lot higher than other organic bananas,” Cascanette says. “But people seem willing to pay more for something ethically sound, so I see a bright future for fair trade food.”