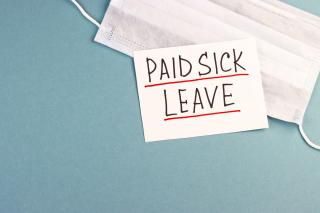 As it becomes increasingly clear that workplaces are a key transmission location in the third wave of the COVID-19 pandemic, some Canadian employers are offering paid sick leave to their employees in the absence of government action.

Paid sick leave benefits, which allow workers to call in sick without fear of losing a day's pay, are becoming a political issue across the country, especially in Ontario. The benefit is one of the measures recommended by a group of experts who advise the Ontario government on COVID-19 measures, but has so far been turned down.

To date, there have been a total of 825 workplace outbreaks in the province's two biggest COVID-19 hot spots--423 in Toronto and 402 in neighbouring Peel Region.

Last year, roughly 2,000 people with COVID-19 reported going into work following the onset of their symptoms and at least 80 worked for one or more days after a positive test result, according to Peel's public health unit.

Without paid sick leave, workers bear the cost of lost income if they don't come to work, labour experts say.

"We're in the middle of a pandemic. Without paid sick leave, there's pressure on especially lower-income workers to come into work even if they're not feeling well," said Raji Jayaraman, an economics professor at the University of Toronto.

The Canadian Press contacted 36 employers across the country where workers must be physically present, seeking information about their paid sick leave policies.

Loblaw introduced programs for all full- and part-time employees "to ensure no one would lose pay for COVID-related absences," said spokeswoman Catherine Thomas.

She added that "thousands of employees" have used its "pay protection program,which she said amounts to paid sick days during the pandemic.

Metro Inc. also offers paid sick days "to a number of unionized employees depending on their collective agreement as well as to a number of employees who are not unionized," said vice-president of communications Marie-Claude Bacon in an email.

Tim Hortons did not directly answer questions about whether it offers workers paid sick days. However, a spokesperson said a program funded equally by the company and franchisees "ensures that Tim Hortons team members who have contracted COVID-19 or who are self-isolating at the specific request of the government, medical authority or restaurant owner will be compensated for scheduled hours for up to 14 days."

Tim Hortons did not respond to follow-up questions regarding whether the program covers employees who stay home if they suspect they may be sick.

Maple Leaf Foods also did not directly answer questions about its paid sick leave policy. The company "is providing nourishing food people need during this pandemic and we are committed to finding the best ways to fill our essential role and keep our people safe at the same time," said Janet Riley, vice-president of communications.

Paid sick days should be legislated through governments' employment standards to make sure all workers have access to it, said Carolina Jimenez, a co-ordinator with advocacy group Decent Work and Health Network.

Only 42% of working Canadians say they have access to paid sick leave, while only around 10% of low-wage workers do, data from the Public Health Agency of Canada shows.

"Workplaces are key drivers of infection. We've seen these numbers time and time again," said Jimenez, who is also a registered nurse in Toronto.

"It's no coincidence that these are the very same places that employ workers at minimum wage, with very little protection, no paid sick days."