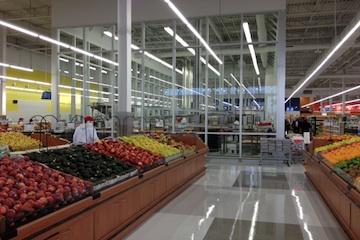 The store, in the city’s Scarborough district, is 60,000 square feet — some 5,000 square feet bigger than Adonis’s next largest store, in Laval, Que. — and features, among other things, an in-house pita making factory behind glass walls (shown in photo).

Officially opened Wednesday, the Scarborough store employs more than 275 and features an eclectic mix of multicultural fare — from Middle Eastern brands like Al Wadi to South Asian brands such as Colonel Kababz. It also showcases Canadian names like Kraft and Schneiders and Adonis's own private-label products.

This is Adonis' second store in Ontario. The first opened a year ago in Mississauga. Six other Adonis stores are situated in and around Montreal, where the retailer was founded.

Adonis’s roots in Montreal are as a Middle Eastern grocer. But in Ontario it is targeting “most multicultural communities” including Chinese and  South Asian shoppers, said Nabil Abi Aad, Adonis’s purchasing and marketing manager.

“We are trying to give the customer what they are missing from back home. We’ve increased our assortment so we’re reaching more communities,” he said.

That strategy was on display in many aisles of the Scarborough store.

In one end of the noodles aisle, meanwhile, five SKUs of Kraft Dinner occupied a shelf above eight SKUs of Emma brand potato gnocchi.

Chain-wide, Adonis is known for its home-meal replacement offering. In the Scarborough store, fresh hot sandwiches, pizza, grilled food as well as Middle Eastern pastries like baklava and maamouls are sold behind counters along the perimeter.

Other perimeter counters are devoted to nuts and olives and seafood. Two meat counters (one for halal) are situated at the back of the store.

But the pita factory is perhaps this Adonis’s most distinctive feature. "It’s behind glass so customers can see the pitas being made. They can see that they are fresh,” Abi Aad said.

Indeed, the pita production (reminiscent of Krispy Kreme’s once-famous in-store donut making facilities) halted shoppers in their tracks on opening day. Many stood still to watch as the pitas came out of the oven on conveyor belts and headed off to a table where employees put them in plastic bags, then onto shelves for sale.

The Scarborough Adonis store is located next to a Brick furniture store in a power center. The Brick had formerly occupied the whole building before Adonis moved in.

Grocery stores in the neighbourhood include Al Premium, a sprawling 75,000-square-foot ethnic supermarket opened more than a year ago by the Oriental group of supermarkets, a Walmart Supercentre, No Frills and a Metro.

In 2011, Metro Inc. bought a 55 per cent stake in the chain. Adonis management continues to run the company.