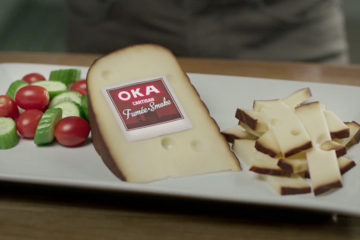 Agropur-owned Oka has launched its first-ever national marketing campaign in an effort to move the cheese brand from “special occasion” to “everyday occasion.”

The campaign includes three 30-second TV ads featuring situations from daily life: a father doing homework with his son; a couple who slept in; and professionals getting home from work. Each spot highlights a different Oka cheese (such as Oka L’Artisan Smoke, Crème Oka and Oka Portion Pack), and ends with the tagline, “A fine choice for any occasion.”

“ may know Oka as the good old Quebecois product that you’ll find on any type of cheese platter,” says Francis Viau, marketing director, cheese, national brands at Agropur. “What we’re trying to do with the brand is democratize the product and multiply the occasions. So, not only will it live nicely on the cheese platter, but we want to bring it into a day-to-day type of occasion.”

In doing so, the campaign also shows the breadth of the Oka portfolio. For example, the ads portray Crème as a breakfast occasion and the new Portion Pack as a snacking occasion. “We still have some uneven awareness on some of our products, and we thought it was a good to bring more awareness towards those products specifically.”

Viau says the campaign targets two audiences: current Oka consumers 25 to 55 who may not be aware of the full product line, and fine cheese consumers, especially outside of Quebec, who may be aware of Oka but haven’t tried it yet.

The campaign follows on the heels of a fall campaign that ran in Quebec, promoting the Portion Pack.

The decision to launch Oka’s first national campaign stems from a “hyper-growth strategy” for the brand, says Viau. “Since 2014, we have deployed a lot of resources to bring Oka to a higher level. We support it on TV and we’ve had a numerous commercial activations, events, sampling and so on. But, until recently, our strategy was targeted according to the market: Quebec and rest of Canada,” he says.

“In our latest research, we learned that the consumer outside of Quebec is now more aware about the brand, and they are ready to hear the same thing that the Oka consumer in Quebec is hearing about the brand. So we came up with just the right creative and the right tone that’s resonating with all consumer across Canada.”