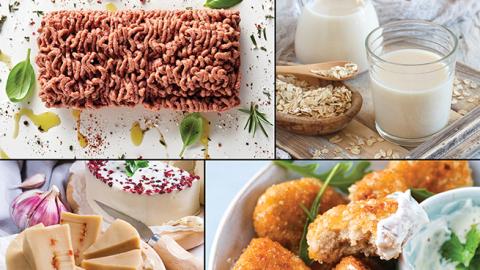 Interest in alternative meat and dairy products remains high, driven by consumers looking to make more eco-conscious and healthier dietary choices. And innovation is making plant-based products more delicious and diverse than ever.

While some companies in the alt meat space have recently reported a slowdown in sales, attributed to a range of factors, there’s no denying plant-based foods are still big business. In fact, a 2021 report from NielsenIQ shows plant-based foods are now a $1.1-billion market in Canada with 17% growth in the 52 weeks ending May 15, 2021. Alternative meat and dairy products are leading the category. “It just keeps rising over and over again. Year after year, [we’re seeing] double-digit growth,” says John Mastroianni, vice-president merchandising at Toronto’s Pusateri’s Fine Foods, describing the interest he’s seeing in plant-based meat and dairy.

The popularity of alt meat and dairy is largely being driven by flexitarian or “plant-curious” consumers who also purchase traditional meat and dairy products. “We know that more and more Canadians are interested in a flexitarian diet and want to introduce more plant-based products into their mealtime routines,” says Kathlyne Ross, vice-president product development and innovation at Loblaw. “In fact, we’re noticing that our plant-curious customers span across all age categories. It’s not just one specific demographic looking for more meat and dairy alternatives.”

Experts note that alternative meat and dairy products have broad appeal across age groups because the potential benefits of plant-based eating are equally varied. Older demographics typically turn to alternative meat and dairy as a better-for-you addition to their diet, while younger consumers tend to be motivated by the smaller ecological footprint of plant-based eating. NielsenIQ’s report found 32% of Canadian households that consume plant-based products are driven by health consciousness, while 23% hope to contribute to environmental sustainability.

“Older demographics are looking at plant-based products because of health reasons and doctors telling them to reduce their red meat intake. For younger generations, it’s about the environment,” says Tony Morello, CEO of plant-based food company Zoglo’s Incredible.

While health has long been a motivator for consumers purchasing alternative meat and dairy products, growing global attention to sustainability is also giving the category a boost. “Consumers are much more aware of the impact their food choices have on the environment,” says Brittany Hull, vice-president, marketing at Earth’s Own, a plant-based beverage company headquartered in Vancouver. “People are starting to come to plant-based eating for environmental reasons, whereas we didn’t see that as much even two or three years ago.”

Consumers are also more interested in alternative meat and dairy for the simple reason that as the plant-based food industry continues to innovate, the products taste better and make more appealing replacements for their traditional counterparts.

“Product innovation is certainly driving interest in plant-based products,” says Mitchell Scott, co-founder and CEO of the Very Good Butchers in British Columbia. “Taste still rules—and we know it is the biggest barrier to overall plant-based meat adoption. Ultimately, a lot of consumers are seeking out plant-based options that have the same flavours and textures as the animal products they used to (or may still) enjoy.”

Zoglo’s Incredible recently overhauled its plant-based meat lineup, leveraging new technology to create a more meat-like texture in its 12 new SKUs. “It’s what we call an extrusion process,” says Zoglo’s Morello. “It allows the pea protein and the soy protein to mirror a muscle meat texture.”

Jim Delsnyder, Zoglo’s COO, says the brand’s pub-style chicken tenders have been the bestseller so far from the revamped product lineup. Adam Grogan, president of Greenleaf Foods, also notes that plant-based chicken is a rising star in the alt meat category. “We’re seeing a revolution in [plant-based] chicken that I think is the next wave—it’s the next [plant- based] burger,” he says.

In October, Greenleaf rolled out an unbreaded, whole-muscle, plant-based chicken made from pea protein under its Lightlife brand in Whole Foods Market locations across the United States and Canada. “When you tear it apart, you can almost see the pull of a chicken breast,” says Grogan.

Mastroianni says Pusateri’s stores have recently added Heura Mediterranean Chicken Chunks, a Spanish brand made from soy protein, to their alternative meat lineup. “It actually tastes and feels like chicken,” he says.

Many of the plant-based chicken items from the Very Good Butchers, Zoglo’s Incredible, and Greenleaf leverage peas as an alternative protein source. Peas are also popular among plant-based milk companies like NotMilk from Chile and Sproud from Sweden. Sproud, which recently made its debut in Canada, claims its pea protein-based milk alternative requires 80% less water to produce compared to almond milk, while also containing five times as much protein. It also claims to offer a more neutral flavour compared to many other plant-based milk options, making it a straightforward substitute for milk in baking.

Similarly, sustainability and taste are the main reasons oat milk continues to dominate the alt milk category. “Oat milk is about as perfect as you can get right now for plant-based milk,” says Earth’s Own’s Hull. “It’s creamy and delicious, but it also functions really well in hot drinks. It’s really nutritious and also it’s a bit of an environmental superhero because of how it’s grown. It’s the most environmentally-friendly of all the plant-based milk out there.”

Pusateri’s Mastroianni says sales of oat milk “by far outpace” other alt milks in its stores, adding that a heightened consumer focus on sustainability is causing a shift away from once-popular dairy-free beverages like almond milk. “I think there’s still a market for almond milk, but a younger generation understands what it takes to actually make almond milk,” he says. “It’s not just about the food they’re eating but the world that we live in.” 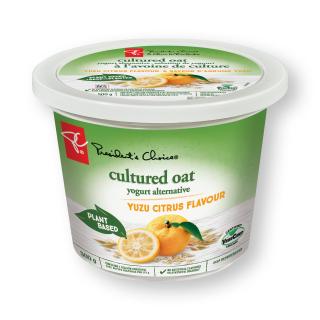 But it’s not just alt milks that are making waves, plant-based cheeses are also gaining momentum. Danone recently added shredded mozzarella and cheddar to its plant-based lineup. Geneviève Bolduc, marketing director, plant-based category at Danone, says the new SKUs currently have a limited roll-out in Quebec and Ontario with a wider national launch planned for 2022.

“I think the plant-based cheese area is definitely booming,” says Shoshana Price, head of marketing for Upfield Canada. The company’s Violife brand offers 13 plant-based cheese products, which span from shredded and sliced formats to spreads, hard cheeses like cheddar and a halloumi-style cheese made for grilling—all are produced using coconut oil. Price says a feta-style cheese alternative is currently the brand’s fastest-growing SKU.

“Cheese is the last thing people move away from in dairy because they’re so attached to it. It’s such a comfort food,” explains Price, noting consumers have high taste expectations for alternative cheeses. “Companies like ours are trying to bring something to the table that you wouldn’t have seen before with dairy-free. Our feta or our halloumi are not things you would have found in a dairy-free alternative years ago.”

In terms of merchandising, some experts suggest meat and dairy alternatives are best placed alongside their traditional counterparts. “It would speak to the ever-changing consumer mindset of that flexitarian that includes both dairy product and plant-based product [in their diets],” says Danone’s Bolduc. “Rather than having to walk the full store to find one or the other, they [the consumer] can be exposed to both and make that informed decision.”

Pustateri’s’ Mastroianni also sees success with integrating traditional and alternative meat and dairy. “Let the [alternative] product sit next to what they [consumers] are used to buying or were buying before,” he says. “It’s being able to offer the choices and then letting consumers make that choice.”

Earth’s Own’s Hull, however, says placing plant-based meat and dairy together, along with other plant-based products, can often help to drive up basket sizes. “Plant-based milk tends to be the gateway into plant-based eating. It’s the most developed of all the categories,” she explains. “So actually having a plant-based section is ideal because they [consumers] have already decided they want plant-based [items] and then they see all the other options that are there and they tend to pick up more.”

Upfield’s Price notes that different types of consumers tend to look for alternative meat and dairy in different parts of the store. “Vegans are looking for it in the natural section, whereas someone who’s plant-curious and buys dairy would look for it in the dairy section,” she says. “If the grocery store wants to win with plant-based food, truly they should put the items in multiple areas of the store.”

With sustainability at the forefront of purchasing decisions for the next generation of consumers, Dana McCauley, chief experience officer for the Canadian Food Innovation Network, predicts alternative meat and dairy is going to continue its strong market growth. “Sustainability is the big driver for gen Z and that’s the next group that’s going to be having kids and having those bigger baskets at the grocery store,” she says.

McCauley says some of the exciting innovations she’s seeing in the alternative meat and dairy space involve extracting protein from algae. She says this technology is starting to be used to create plant-based animal feed but predicts it could cross into consumer foods in the near future.

“On the dairy side, it seems like millet and other grains are getting a lot of attention,” McCauley adds, although she notes there are still some hurdles to overcome to achieve the right flavour and colour for dairy alternatives. She says motivation to research grains as protein bases is strong because, like oat milk, they’re potentially a more sustainable substitute for many of the other dairy alternatives currently available. “We’ve been seeing so much momentum around plant-based alternatives and that’s been exciting. Now, though, it’s really getting into kind of a mind-blowing place,” she says.

Zoglo’s Morello also believes we’ve only just started to see some of the most interesting alternative meat and dairy innovations that are being developed around the world. Future products will further intrigue consumers and drive additional sales in the space. “It’s going to change the way that people consume food,” he says. “If for no other reason than the world needs it.”