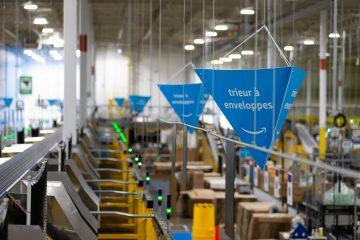 Amazon will hire 3,500 Canadians to work in spaces it is opening and expanding in British Columbia and Ontario.

The e-commerce giant revealed Monday that 3,000 of the jobs will be in Vancouver, where it is growing its footprint, and another 500 will be in Toronto, home of a new Amazon workspace.

Jesse Dougherty, Amazon's vice-president and Vancouver site lead, said the company wanted to offer the jobs in Canada because the country has an "enormous" amount of tech talent Amazon is eager to tap into and accommodate at home.

"I look at it through the lens of how can we grow so that people don't have to leave Canada to learn and take on amazing global challenges that are of a scale that aren't typically available here?" he said.

The bulk of the jobs will be done out of the Post, a Vancouver building where Amazon will take over an extra 63,000 square metres of office space. By 2023 it will be operating across 18 floors it is leasing in the building's north tower and 17 in its south tower.

Vancouver has long been seen as an attractive Canadian outpost for companies because of its proximity to the U.S. and major tech hubs including Silicon Valley and Amazon's headquarters in Seattle.

The company will also welcome new workers in Toronto, where it will lease 12,000 square metres over five floors at an 18 York St. building that is not far from investors on Bay Street. It hopes workers will be in the building next summer.

Amazon's renewed interest in its corporate and tech workforce and footprint in the country comes after focusing the bulk of its efforts in the market on its network of 16 fulfilment centres--13 already in operation and another three coming in Hamilton, Ajax and Ottawa, Ont.

Those centres have faced homegrown competition from Shopify Inc., an Ottawa-based e-commerce business that has shot up the Toronto Stock Exchange to hold the title of country's most valuable company several times this year.

While it was long known for providing the back-end for companies to sell goods online, Shopify launched its own fulfilment network in 2019 and bulked up its presence in Vancouver with 1,000 hires and a new office earlier this year.

Dougherty doesn't appear to be nervous about Shopify.

"Amazon works in lots and lots of different businesses and all of them are highly competitive and we welcome that because it inevitably creates better experiences," he said.

"There are other benefits to having other tech companies raise the bar in markets we work in because it educates more talent, you can move around and it creates more economic activity."

Amazon has invested more than $11 billion in Canada, including infrastructure and compensation, delivered $9 billion to the country's economy and helped create at least 67,000 jobs, he said.

However, many of those jobs have been dogged with concerns.

The Warehouse Workers Centre, a Brampton, Ont.-based organization representing people in the warehouse and logistics sector, started a petition earlier this year that garnered hundreds of signatures claiming "Amazon is failing to protect our health."

The petition alleged that Amazon, which employs tens of thousands of people in Canada and has fulfilment centres in Ontario, British Columbia, Alberta, Manitoba and Quebec, was refusing to give workers paid leave and not telling staff what their plans are if facilities are contaminated or suspected of being contaminated with COVID-19.

The petition claimed physical distancing at its facilities is "nearly impossible" and said some warehouse workers are now putting in 50 hours a week or more, which the petition called "unsustainable" and needs to stop.

Amazon has spent more than $800 million on employee safety since the start of the year, Dougherty said.

The company has unveiled temperature checks, physical distancing measures and offered personal protective wear as part of that investment.

"The health of our employees is absolutely critical to us," Doughtery said. It is our top priority, so we are always paying attention to how those systems are working and ensuring they are the best they can be."