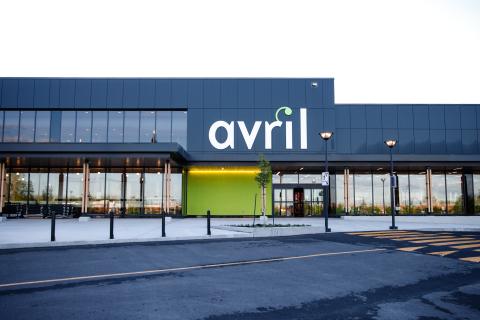 Avril says the 41,500 square-foot store, located in a former Target store, is also the second-largest natural and organic foods store in Quebec, after Avril’s 44,000-square-foot location in Laval.

“Promenades St-Bruno did not have a supermarket since the closure of (grocery chain) Steinberg” in 1992, says Sylvie Senay, co-founder and co-owner of Avril. “I’m convinced it will become one of our strong stores.”

The new store “completes the South Shore area for us,” where Avril also has stores in Brossard and Longueuil, Senay says. She adds she is not worried the new store will cannibalize sales at the nearby outlets.

Originally scheduled to open last November but delayed by the pandemic, the store is part of the mall’s new Marché des Promenades, which when opened in mid-July will have more than 40 restaurants, specialty and artisanal retailers, outdoor spaces and year-round events.

As in the Laval location, a vertical farm overlooks the store. Production, however, will be limited to leafy greens that will supply the in-store bistro, unlike the Laval store which provides micro-greens to all Avril stores.

Avril will implement “click and collect” at the St-Bruno store and expand the service to other stores if it works well, Senay says.

The store has 120 employees and will employ 200 once the bistro, which is currently open only for take-out, is fully operational. There is a 132-seat food court/bistro and 68-seat outdoor patio which will open once the Quebec government gives the green light to reopen patios and/or indoor spaces for dining.

The store has a cold bistro area with a gelato counter and coffee counter and a hot bistro area that features a daily specials section, a fresh pasta counter and pizzas baked in a traditional Italian oven. Ready-to-eat meals are also sold under the Avril Naturellement brand.

Avril’s 10th store and first in Montreal is scheduled to open in mid-June next to the city’s convention centre.

Granby, Quebec-based Avril was founded in 1995 by Senay and Rolland Tanguay. Senay says Avril plans to open two new stores annually in Quebec over the next five years, doubling its store count to 20 by 2026.