Step aside, lackluster bread loaf. With a variety of ethnic flavours and formats, today’s bread products are anything but boring. According to the 2015 Culinary and Bakery Trendscape report from Campbell’s, we’re in the midst of a “bread revival” that puts carbs front and centre.

“We’ve been following this trend for several years, and in most major cities, there’s a new wave of bread bakers focused on Old World trends,” says chef Tom Griffiths, vice-president of Campbell’s Global Culinary and Baking Institute, based in Camden, N.J.

He points to bread varieties inspired by European and Nordic traditions, such as vollkornbrot (a dense German bread) and ruis (a Finnish rye) poised to make a comeback.

“These breads are dense and heavy, made the old-fashioned way in wood-burning ovens,” he says. “People are going back to their roots.”

READ: What every grocery manager can learn from Panera Bread

Along with a growing demand for European- inspired breads, Thoresen says customers are looking or Middle Eastern bread alternatives, such as fresh pita, lavash and naan, to be available from their store’s bakery.

“Any sort of flat- bread offers versatility that other breads do not, because it can be used in handheld sandwiches or as a platform for other ingredients,” he says. “We’ve seen this trend gaining steam in the last two to three years, but it’s still in growth mode.”

Case in point: the pita- making machine at Middle Eastern grocer Marché Adonis has been attracting customers since it opened its first signature store, in Quebec, 37 years ago. The Metro-owned ethnic grocer also showcases in-house pita-making factories in its two Ontario stores.

“Every time we get some- one in the store for the first time, the bread section is the first place they go,” says Wesam Amir, assistant store manager for the store’s Mississauga, Ont.,location. Some 6,000 pita packages are made at that store alone every day, with five pitas per package. Amir says the process starts at 5 a.m. so customers have fresh pitas waiting for them when the doors open for business.

In addition to white-flour pitas, Amir says the grocer has added whole-wheat and wheat-bran varieties to meet customer demand.

At Toronto-based Korean supermarket Galleria, customers flock to a machine that churns out low-cal bread snacks called pop- pers. In fact, the snacks
have become so popular, even larger retailers such as Longo’s and Loblaw’s have gotten into the popper game. 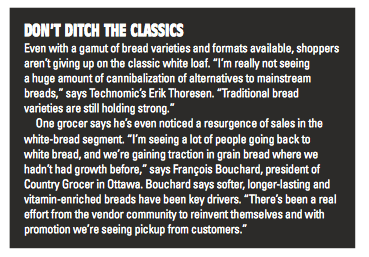 Over at Al Premium, a multicultural grocer based n Toronto, the store makes a point of stocking a wide variety of packaged and fresh breads. “We really choose varieties that are most popular to the ethnic groups in the area,” says office manager Smile Shi. Shoppers of Caribbean, South Asian, Middle Eastern and European descent

make up the major- ity of the clientele. A customer favourite: Chinese buns baked in-house and stuffed with sausage, BBQ pork, bean paste or even custard. “We display the freshly baked breads in our store outside of the bakery so people can smell them as they walk by,” says Shi.

Sold under the Burlington, Ont.-based Pane Fresco label, customers at Fortinos bakeries can choose from 25 varieties of Italian-inspired artisanal breads baked on the premises. While the classic baguette is still most popular, shoppers are opting to try varieties such as the truffle ciabatta and the recently introduced hot pepper bastone.

“Bread so many things, and we see more and more people spending money on it for entertaining,” says Marc Albanese, Pane Fresco’s product developer of artisan breads. “Yes, it’s bread, but we’re offering our customers something unique.”