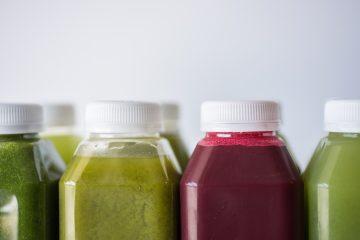 From nutrient-rich juices to mood-mellowing sparkling waters, today’s consumers want beverages that do more than simply quench their thirst. Increased consumer health-consciousness is fuelling the development of beverages with benefits, designed to address everything from immunity to anxiety with each sip.

A 2020 report from the Hartman Group showed 5.3% growth in the functional food and beverage category since 2018, according to senior vice-president Shelley Balanko. “The main reason this space is growing is because more consumers are wanting to approach their health and wellness from a non-medical standpoint,” she says. “They like the idea of functional foods and beverages because they’re natural.”

Digs Dorfman, CEO at Toronto grocer the Sweet Potato, has seen demand for cold-pressed juice in his store rise over the past year. While most of the Sweet Potato’s functional beverages are displayed as their own category, cold-pressed juices are instead featured n the store’s produce section. “If we put it near the cut fruit, it’s seen as a premium fruit product,” he explains.

Cold-pressed juice company La Presserie flash-freezes its juices immediately after bottling to prolong shelf life. Founder and CEO Adolph Zarovinsky says many cold-pressed juices undergo heat or light treatments to facilitate a longer shelf life, which can diminish their nutritional value and taste. “They may be extracted initially as cold-pressed juices, but what happens next somewhat reduces the effectiveness of the initial product,” he says.

In addition to better preserving the juices’ quality, the flash-freezing process also impacts how La Presserie’s products can be displayed at retail. Zarovinsky says many grocers are able to market La Presserie in the produce department with other cold-pressed juices, as well as in the frozen food aisle. “Having our product displayed in two cases definitely increases sales,” he says.

Balanko points out that one drawback to juices for some health-conscious consumers is that they tend to be high in sugar. Offering a functional beverage with zero sugar was a top priority for Alex Simonelli when developing Daydream, a sparkling water infused with hemp extracts and adaptogens, which are plant-derived ingredients said to help the body manage physical and emotional stress. “The food scientists I was working with were telling me, ‘You’ve got to add 10 grams of sugar,’” he says. “I had to bang the drum and find a way to make hemp and ginseng and all these earthy flavours taste good.”

Mood-oriented functional beverages like Daydream are an emerging functional beverage trend, according to Balanko. Even big companies like PepsiCo are getting into the market, with the company recently launching Driftwell, a relaxation-enhancing beverage containing L-theanine.

Ellen Osborne, grocery buyer for Toronto’s Summerhill Market, says their stores have seen a growing demand for mood-oriented functional beverages like Daydream and Kite, another sparkling water brand enhanced with adaptogens. “People are looking for something to [help them> unwind and they don’t want to drink that glass of wine,” she says.

Summerhill Market displays functional beverages such as adaptogen-infused waters, kombuchas, and specialty cold brew coffees in their own section, separate from traditional beverages. “They’re at such a different price point compared to the standard Snapple,” says Osborne. “You have to really make sure the consumer is able to see the difference in terms of what they’re buying.”

As the functional beverage market evolves, Balanko thinks taste and natural functionality will take on even greater importance. “Consumers prefer to get functionality from inherent sources, as opposed to something that’s overly engineered,” she says. “In the future, we would anticipate that new innovations are even more clean and leverage the inherent functionality of naturally occurring ingredients.”