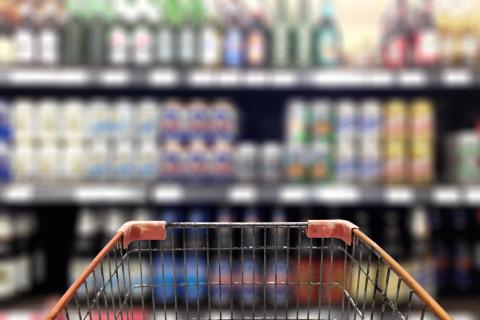 While we’ve all seen those memes about people drinking their way through lockdown, are consumers actually drinking more alcohol these days? Or are they just drinking differently? And how are their alcohol-purchasing patterns changing?

Kathy Perrotta, vice-president, market strategy and understanding at Ipsos, has been doing a deep dive into the subject using Ipsos’s Alcohol Consumption Tracker (ACT). “We’ve been in the field every day, 365 days of the year, since 2012,” she says. “We can really see a shift in the data from April 2020 to March 2021. People aren’t drinking more; they’re drinking differently.” Of course, this has much to do with alcohol sales being limited through the usual out-of-home channels (bars and restaurants) during lockdown, prompting a shift to home consumption.

“Wine and RTDs [ready-to-drink cock- tails] are the big winners,” says Perrotta. “They’ve taken their share away from beer. That’s driven by a shift among younger consumers’ drinking habits, especially females, who are moving to things like hard seltzer.” Despite this, beer still dominates at grocery, making up 66% of beverage-alcohol sales. Demand for beer has “softened, but not declined,” Perrotta notes.

Sales of alcohol at grocery (where it’s permitted, in provinces such as Ontario, Quebec, New Brunswick and British Columbia) are up about two to three percentage points. The impact is considerable as more shoppers put wine, beer and cider on their regular grocery lists to limit the number of stores they visit during lockdowns.

For grocers, this pivot in buying behaviour represents a great opportunity, especially around pairing. “When you source something from a grocery retailer, it’s most often consumed at meals,” Perrotta explains. “There’s a built-in pairing mindset the consumer has. They are looking for alcohol options to serve with dinner. And they’re wondering what goes with the wine they just bought.”

With that in mind, grocers can be strategic about product placement and promotions, building out adjacent selections for related merchandise like barbecue-related goods, utensils, attractive plastic glassware, napkins, cedar planks and spice rubs. “Grocers have a unique, but limited opportunity with a captive audience who are buying more alcohol in their stores now,” says Perrotta. “But it’s not going to last forever.”

Vince’s Market locations have seen a bump in alcohol sales during the pandemic. “Our customers are buying beer and wine from us much more frequently,” says Mallory Myers, the Ontario retailer’s alcohol specialist. “The convenience factor is key for consumers to make Vince’s their one-stop shop. We’ve seen a marked sales increase in large volume containers for wine.”

Myers finds consumers are drawn to limited-time offers and bright, colourful labels, which inspire trial and repeated purchases are dependent on product quality. This summer, Vince’s expects robust sales for ciders, sour beers, Pinot Grigio and rosé wines. Its locations have dedicated refrigerators so shoppers can easily access chilled wine, beer and cider. Myers also notes consumers are seeking hyper-local craft beer more than ever. “If the brewery is within a smaller radius to a location, we see significant performance bumps,” she says.

On the beer front, the folks at Wayne Gretzky Craft Beer say lager still leads, but customers are also gravitating to hoppier offerings, such as its Hazy IPA. According to Chris Wei, category manager, Andrew Peller Limited (which owns Wayne Gretzky Craft Brewery), while consumers are willing to try new styles such as sours and stouts, the brewer has noticed loyalty to existing favourites.

To support sales at grocery, strong connections between grocers and vendors pay off. Corby Spirit and Wine’s sales team works with local stores two to three months out on programming, ensuring adequate stock and POS displays to generate excitement in the wine aisle, says Gerald Whitley, the company’s regional trade marketing manager for Ontario. It also focuses on staff education at the store level. “Our goal is to create some simple tools that front-line staff can utilize,” he says, “to not only develop their wine knowledge, but also help them engage confidently with shoppers and make informed suggestions.”

Whitley foresees the role of grocery retail in the wine and spirits industry undergoing a massive transformation. Overall alcohol trends, including a desire for light and fresh options (such as Sauvignon Blanc), large-format sizes, wines that offer value, no- and low-alcohol brands, and sparkling wine enjoyed any time, will be even more relevant to grocers. “I think some of those trends will start to make their way to grocery store shelves over the next 12 months,” he says.