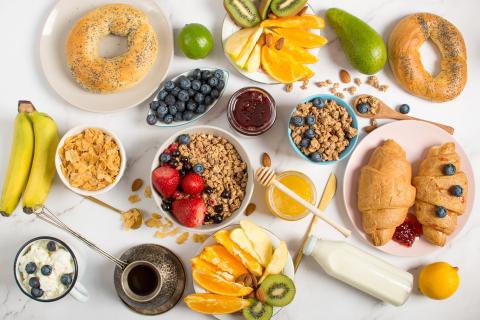 Breakfast is often described as the most important meal of the day, and that adage is now proving truer than ever with consumers. Breakfast consumption at home has increased by 5.7% over the past year, says Christine Jakovcic, vice-president, marketing & nutrition, Kellogg Canada, citing Ipsos FIVE data. Leigh Fenwick, senior marketing manager for Bimbo Canada, notes the bagel category grew by 19.4% in dollar volume in 2020 (according to NielsenIQ data), while Egg Farmers of Canada reports that one in three Canadians is eating more eggs now compared to last year.

“There was definitely a COVID effect last year and a lot of those trends are still holding right now,” says Giancarlo Trimarchi, partner at Ontario’s Vince’s Market. He says Vince’s locations have seen a big sales boost in eggs, bacon, sausages, prepared fruit and other breakfast foods. Trimarchi believes the sales growth in breakfast foods is largely due to consumers spending more time at home amid the pandemic. “People are consuming the majority of their breakfasts at home, when they used to be doing it through quick-service [restaurants],” he says, adding, “A lot of people probably weren’t even having breakfast at all before.”

Without the time crunch of the morning commute to the office, many Canadians working at home over the past year have had more time to spend making breakfast. “We noticed that breakfast came back in style during the pandemic,” says John Mastroianni, general manager at Toronto’s Pusateri’s Fine Foods. “It was no longer grab a bar and run out the door.”

More time to prepare breakfast is also driving consumer interest in new flavours and creative preparation techniques. “When you’re at home more, there’s more time to cook at a higher quality level,” says Marty Weintraub, partner, national retail leader at Deloitte Canada. “We’re seeing this rise of the epicurean home chef. The idea that ‘I can do better than I’ve done before, because now I have the time.’”

Shelley Balanko, senior vice-president at The Hartman Group, says consumer desire for discovery and newness in their foods is a driver behind many current breakfast food trends. “Keeping it interesting and eating in a more global way allows consumers to feel a sense of adventure,” she says, “especially in the last year, when we haven’t been able to travel and explore and have those experiences.”

Sarah Caron, director of marketing and nutrition for Egg Farmers of Canada, says breakfast boards and platters are one way consumers have gotten more creative with morning meals. “They’re really popular among both millennials and gen Z. It’s basically a collection of various foods—proteins, pastries, fruits and veggies—all displayed on this beautiful large serving board.”

Bimbo’s Fenwick says the Dempster’s and Pom Signature Bagels lines, which launched in January, also address consumer interest in new flavours (with Parmesan Garlic & Herb, Four Cheese, and Banana Chocolate Chip as part of the new lineups). “We are looking at this as an opportunity for consumers to enjoy the premium bagel experience in the comfort of their own home,” she says.

Health also continues to be a key factor in consumer breakfast choices. “Morning occasions tend to be our most health-oriented occasion,” says Balanko. “We tend to start the day off with the intention to eat healthy.” Egg Farmers’ Caron adds that health is an important reason why many Canadians turn to eggs at breakfast. “Canadians know that eggs are an affordable source of protein and really part of an overall nutritious diet,” she says.

At Pusateri’s, Mastroianni says they’ve recently introduced Simply Eggless (a plant-based “egg” product) at their stores in response to the burgeoning plant-based breakfast food trend. “In the first week we brought it in, we practically sold out,” he says.

Andrew Maida, founder of Flourish Pancakes, says many consumers are now looking for added better-for-you benefits from their plant-based products. Flourish offers high protein and plant-based pancake mixes, with a keto-friendly line set to launch soon. “Plants alone aren’t good enough for plant-based shoppers,” says Maida. “We’ve found that when plant-based is combined with gluten-free and certifications like non-GMO, it improves the purchase power of the product.”

Better-for-you cereals and granola are also emerging as a favourite among health-conscious consumers. “We’re noticing a lot of innovation in healthier cereals, particularly when it comes to granola and gluten-free cereals,” says Vince’s Market’s Trimarchi. At Pusateri’s, Mastroianni says the grocer is about to roll out its own line of granola in response to consumer demand. “One of the big surges this year was granola,” he says.

Breakfast meal kits and boxes are a potential area of opportunity for grocers, predicts Deloitte’s Weintraub. “Right now, they’re pointed at dinner and maybe lunch, but no one has really touched breakfast yet,” he says of the meal kit trend. “I would hypothesize that breakfast is maybe the next meal to be disrupted by some of these behaviours.”

Pusateri’s recently launched a series of breakfast boxes that include a plant-based box and a full breakfast box packed with more traditional items such as double-smoked bacon and free-run eggs. “We wanted to make life easy for people and convenient, giving them choices and eliminating the guesswork out of that first meal of the day,” says Mastroianni. “We wanted to curate boxes that would offer those solutions for consumers and help them switch it up every once in a while.”

Egg Farmers’ Caron says prepackaged breakfast boxes can be another way for grocers to tap into the breakfast board trend. “Grocers can jump on that trend by creating their own,” she says. Similarly, Kellogg’s Jakovcic suggests grocers can also help inspire customers with breakfast-themed displays that highlight different products together such as cereals, milk, juice, coffee, yogurt and fruit. In the frozen aisle she suggests pairing frozen waffles with frozen fruit.

Bimbo’s Fenwick says off-shelf displays offer an additional way to pique consumer interest in breakfast products. “That’s especially true within the fruit bread category,” she says. “It’s largely an impulse-driven category, where the majority of our sales are actually purchased on display.”

With the growth of the category primarily attributed to more Canadians working from home, it’s unclear what the gradual shift into post-pandemic life will mean for breakfast. “The really interesting data collection is going to be once we return to normal—what happens to these volume categories, if they hold or if they start to retreat,” says Trimarchi. “That’ll be indicative of [whether] the different routine changes really hold or not.”

Pusateri’s Mastroianni believes the pandemic has shifted the way consumers think about breakfast. “Mornings during the pandemic have really brought people back to how important it is to start the day off on the right track,” he says. “It’s energizing your body for the rest of the day—and your mind and your soul.”