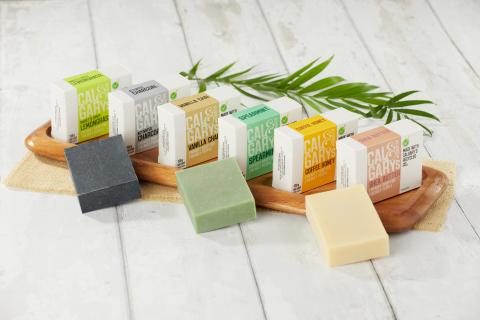 In a Canadian-first, Calgary Co-op has developed a soap made from carbon captured from its head office and converted into mineral form.

It is likely the first of several carbon-captured products to be released by the co-op’s fast-growing private label brand, Cal & Gary. The label launched in 2000 and now has more than 600 products.

To make the soap, the co-op purchased a device from Calgary-based CleanO2 that pulls in carbon dioxide from heating building systems normally emitted into the air. The captured CO2 is then converted into pure pearl ash (potassium carbonate) and then harvested from the unit (which is about the size of two refrigerators) to a manufacturing facility.

Gruber estimates the unit’s impact on removing CO2 emissions from the co-op’s head office per year is the equivalent of planting more than 300 trees.

The soap comes in recyclable packaging and is branded with the slogan, “Friendly Soap for Friendly People,” and will show up in the “natural store” department of the co-op’s supermarkets, where soap bars retail for between $7 and $12.

“As a standalone product that is unique, our regular retail is about $6.99 [for a 130-gram] bar, with some room for price promotion,” says Gruber. “When we were doing product development and the assessment around financials, we found one bar of this soap will last a minimum of 53 washes.”

That is at least 20 washes more than the typical bar. “So when you do the math, it’s about 13 cents a wash,” she says.

The challenge for Cal & Gary’s carbon-capture soap?  Customer education. “We have a lot of different communication soundbites,” says Gruber. “But we want to keep it simple and make sure our customers really understand the general concept without getting into the weeds.”

However, Calgary Co-op has not set a sales objective for the soap. “ESG efforts are really about connecting with consumers not just on their wallets, but a social commitment. And so with a program like this, it is more about what I would call nurturing our business. And so in the first year, we’re probably not going to peg a dollar objective because we’re in this for the long-term, both from an environmental and product standpoint.”

For Gruber, the soap is just the beginning.

“We will go into other product categories with a similar story,” she says. “We’re exploring some commercial cleaning products that would be made from captured carbon, like in the car wash systems of our gas bars.”

That makes the investment into the carbon unit more than worth it, adds Gruber. “It is affordable for the entire end-to-end cycle for what we believe we are doing to help the environment in Calgary.”