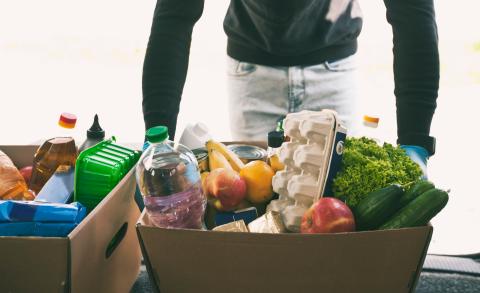 Non-profit organizations distributed an estimated $33 billion worth of food in 2020. (Shutterstock/Skylines)

Canada currently has four times as many food charities as it does grocery stores, according to new research from food rescue organization Second Harvest and Value Chain Management International, a company dedicated to creating environmentally and financially sustainable value chains.

Canada’s Invisible Foot Network found there are currently more than 61,000 non-profit entities providing food to Canadians at low or no cost, compared to 15,344 grocery stores. Non-profit organizations distributed an estimated $33 billion worth of food in 2020, which would have made them the second largest grocery store in the country by sales.

“There’s no area that doesn’t suffer from food insecurity in the country, says Second Harvest CEO Lori Nikkel. “It is outrageous to me that in a country as rich as ours, we have 61,000 organizations that have popped up to support people with low or no-cost food.

Without government efforts to help create affordable housing and childcare, and the introduction of a basic income, chances are practically nil that there will be a decline in the number of food charities in the coming years, says Nikkel. “Why would it change unless we have some big, audacious policy changes?” she says. “That’s what needs to happen.”

“We don’t value food in this country, and we don’t value people when they are low-income,” says Nikkel. “This is a system that’s not sustainable at all. We need huge intervention, and we need it quickly.”

Asked if there is something the grocery industry can do to address the situation, Nikkel says grocers are doing “great stuff” at the local level, but the national chains have an opportunity to be a leading voice for change. “For sure they could advocate for policy change, absolutely,” she says.

The study identified “significant increases” in demand for foods and beverages during the pandemic, with the median number of people served by community food organizations increasing by 72%. The estimated total volume of food distributed outside of schools’ student nutrition programs rose by 61%, from 6.19 billion pounds to 9.99 billion pounds. That number rose to 10.45 billion pounds with the inclusion of schools.

The pandemic also produced a marked spike in the number of people accessing these services, which increased from 5.37 million pre-COVID to 6.66 million. The number of transactions in Quebec rose 89% between 2019 and 2020/21, while the number rose 72% in the Territories, 71% in Ontario and 67% in the Prairies.