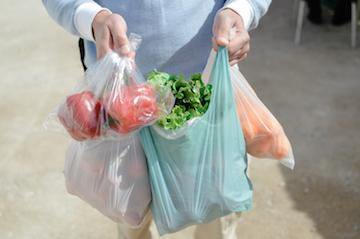 A government policy to ban single-use plastics in Canada may end up causing some – perhaps many – Canadian grocers a lot of aggravation for the strict interpretation of what constitutes “single use plastic.”

The problem is for those grocers that have been making the switch to compostable grocery bags, which they believed would be permitted under the ban. Those businesses are realizing now that is not the case based on the final “single-use plastics prohibition regulations” published in June.

Calgary Co-op was one of the first to speak out on the matter. Earlier this month, it issued a press release stating it supports the ban on plastic shopping bags. The grocer introduced compostable bags in 2019, and completely phased out plastic shopping bags in January 2020. A recent third-party report even confirmed that its bags contained 0% plastic. But, it turns out, that’s not good enough.

“During a recent call with representatives from Environment and Climate Change Canada, it was revealed that Calgary Co-op’s compostable bags would indeed be included in the ban,” said CEO Ken Keelor.

The leadership team at Toronto’s Summerhill Market was similarly surprised to discover its compostable bags were not okay. “We were frustrated,” said Summerhill’s vice-president Christy McMullen. “The ban is for single-use plastic. These bags are not made from plastic and customers can use these again – they do not have to be single use.”

Gary Sands, senior vice-president of the Canadian Federation of Independent Grocers, expects many more grocers to have similar issues. “I'm sure there's gonna be hundreds of retailers in the same position as Calgary Co-op,” he said. “I just believe people aren’t aware of this. They’ve heard about a plastic bag ban and they’re thinking, well, compostable bags can’t be included in this, but it seems like they are.”

In a statement provided to Canadian Grocer, Samantha Bayard, a spokesperson for Environment and Climate Change Canada, said the ban covers both conventional and unconventional plastics, including biobased, compostable and biodegradable. While biobased plastics offer some benefits over “fossil-based” plastics, they are still problematic to manage at their end of life, she said.

“For example, compostable plastics are currently screened out by most organics recycling facilities and sent to landfill, due to longer biodegradation times than food and yard waste,” she said. “They contaminate recycling streams, and they have not proven to perform better than conventional plastics when littered on land or in water.”

There is “no significant evidence” that biodegradable plastics fully break down in the natural environment, she said, adding that “further study is needed on their environmental impact.”

However, Keelor said Calgary Co-op worked with the City of Calgary to make sure this would not be a problem with its bags. “[T]hey have the equipment to fully break them down,” he said.

Keelor, McMullen and Sands all pointed out the inconsistency in the ban that will allow the grocers to sell the same compostable bags to their customers but can’t use them at checkout.

CFIG is also unhappy the government conducted consultation about the plastics ban with the industry during the height of the pandemic when many grocers were dealing with an unprecedented crisis and struggling just to stay in business.

“If you’re in a lockdown you’re not participating in a consultation on plastic bags,” said Sands. “Yes, we were cognizant of a plastic bag ban. But this isn't plastic we're talking about, these are compostable bags and this caught everyone by surprise.”

While the ban for some single-use plastics begins in December, the ban on shopping bags won’t take effect until December 2023. Keelor is hopeful that Ottawa might change its policy by then, but knows that may not happen.

“All we are asking is for the federal government to review this decision regarding the inclusion of our compostable bags in the single-use plastics ban,” said Keelor. “If this does not happen we of course are prepared to move forward with some of our other options.”

Meanwhile, Summerhill has already ordered more than a year’s worth of compostable bags. “If the ban comes into play before we use them up, then I’m not sure what we will do,” she said. “Perhaps we’ll have to throw them away.”