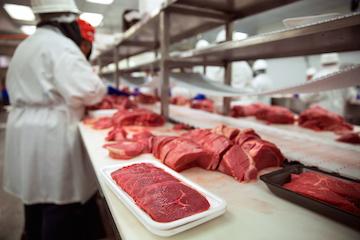 A meat-packing plant in southern Alberta where a worker died because of COVID-19 is temporarily shutting down as the result of an outbreak at the facility.

Cargill's High River plant, which employs about 2,000 workers, has 360 cases of the novel coronavirus.

"There has also been spread in the community beyond these workers, with 484 cases linked to that outbreak," Hinshaw said.

"Not all of these cases are people that work at that plant. Many of these cases live in surrounding communities such as Calgary. Many of the cases identified in the Calgary zone over the weekend were linked to this broader outbreak."

Hinshaw announced the Cargill death at a provincial news conference on Monday.

She said control measures have also been put in place at the JBS Foods meat-packing plant in Brooks, Alta., where 67 cases have been confirmed.

A spokesman for Cargill called the shutdown a difficult decision, as the plant is considered an essential service.

"Considering the community-wide impacts of the virus, we encourage all employees to get tested for the COVID-19 virus as now advised by Alberta Health Services as soon as possible," Jon Nash said in a statement.

Production is to stop once meat already in the plant is processed to avoid any food waste.

"We will process approximately three million meals currently in our facility as quickly as possible. We greatly appreciate our employees who are working to complete this effort," he added.

It's not clear how long the plant will be shut down, but the company did say workers would be paid according to their collective agreement.

The plant, just north of the town of High River, processes about 4,500 head of cattle per day--more than one-third of Canada's beef-processing capacity.

Cargill had earlier announced a shut down of a second shift of workers and the implementation of a number of new safety protocols, including temperature testing, enhanced cleaning and sanitizing, use of face coverings, screens between employee stations and prohibiting visitors.

The president of the United Food and Commercial Workers union 401, which represents the Cargill employees, said the shutdown is better late than never. But he still has many questions.

"We still have grave concerns about their transparency. What are they saying to their workers ... what does the future look like?" said Thomas Hesse.

"It isn't just about pausing the plant ... creating economic anxiety among these vulnerable workers is another problem."

The union had been calling on Cargill to shut the plant down for two weeks to allow workers to self-isolate and to give the plant a thorough cleaning.

Hesse said three-quarters of members expressed concern about their safety during a union conference call Sunday.

He added that he wanted an independent third party to look at the plant and give an assessment.

An official with the Canadian Union of Public Employees in Alberta said the shutdown is overdue, since cases at Cargill were causing a cross-contamination of another essential service in the town of 12,000 people.

Lou Arab said five employees at Seasons Retirement Communities in High River have tested positive for COVID-19. Three of them are married to meat-packing workers.

"The plant needs to be shut down until they figure out what's going on and until they know it has been made safe," Arab said.

"It's going beyond the plant and it's going into the community."