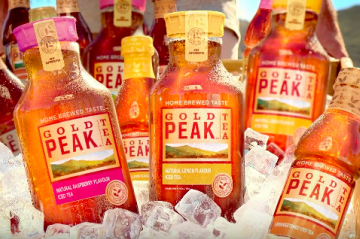 Coca-Cola has a new iced tea brand in Canadian grocery stores with the recent introduction of Gold Peak, a $1-billion-brand in the U.S.

According to Euromonitor’s just released “RTD Tea in Canada” report, 444 million litres of RTD tea were sold in Canada in 2016, an 8% increase. The market growth is being driven largely by rising interest in healthier consumption options and demand for “authentic, unique experiences from beverage consumption.”


Coca-Cola positions Gold Peak as a premium ready to drink tea option, and emphasizes its “homemade” taste with the tagline “The taste that brings you home.” (Citing Nielsen Market Track research, Coca-Cola says the premium RTD tea category is growing at at least 30% in Canada.)

“Crafted with mountain grown tea leaves and natural flavours, Gold Peak delivers on a taste so good you’ll swear it’s homemade,” said Michael Samoszewski, vice-president, marketing, Coca-Cola, in a release. “Each sip reminds you of what matters most—the comforting feeling of home and family and being surrounded by loved ones.”

Marketing will include TV, social and retail activations as well as sampling in major markets across Canada.

The RTD tea category is expected to enjoy a compound annual growth rate of 8% in volume terms and 9% in value terms, reaching 646 million litres by 2021.

“As tea is poised to maintain its strong growth momentum due to the growing interest in herbal/fruit tea and loose leaf tea and the still relatively low per capita consumption, RTD tea will likely continue to benefit from this trend,” according to Euromonitor. “As an RTD version of the tea beverage, RTD tea offers additional convenience and a portability feature for consumers, particularly the younger generation, leading increasingly busy lifestyles.”

Gold Peak’s introduction to Canada comes as Coca Cola and Nestle end a 16-year global partnership to produce and sell Nestea iced tea. However, Nestle also granted Coca-Cola a license to produce Nestea in Canada for seven years as well as in a handful of other markets in Europe. Coca-Cola Canada declined to say how long the license agreement would be in place.

“Nestea continues to deliver great value for us in Canada and with both Nestea and Gold Peak in our portfolio, Coca-Cola is offering Canadians a variety of great-tasting RTD tea options,” said Shannon Denny, director of brand and business communications, in an email to Canadian Grocer.

According to Euromonitor, Nestea claimed 50% of value share in 2016, with strong sales attributed to wide distribution and new flavours introduced in 2015.