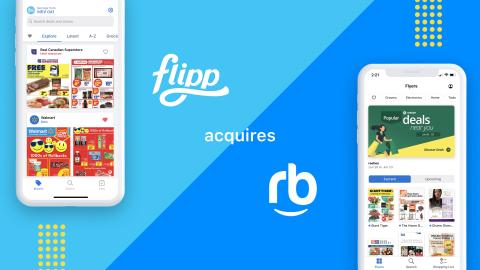 Toronto-based Flipp has acquired its largest competitor, reebee, in a deal that further strengthens its position as Canada’s largest digital flyer company. Terms of the deal were not disclosed.

Established in 2012, Waterloo, Ont. -based reebee is the country’s second largest digital flyer company, with approximately two million monthly users. “We’ve been aware of reebee for a long time, and we’ve always been impressed with what they’ve done,” says Flipp CEO Michael Silverman.

He says there is “very minimal” overlap between the two companies, which have a combined monthly Canadian user base of nearly six million people. (Flipp also has a presence in the U.S.) “If you think about it, you don’t really need two flyer experiences on your phone,” he says. “People usually become devout users of one or the other.

“Our apps, for a variety of nuanced reasons and various geographies throughout Canada, spoke more effectively to one group or another,” he adds. Reebee, for example, has traditionally had what he describes as a “slightly stronger” business in Quebec.

The merged entity will boast approximately 425 employees across departments including operations, engineering, finance, and business development. There will be no layoffs as a result the deal, says Silverman.

“In a world where some of the largest tech names are doing massive layoffs, we’re in exactly the opposite position,” he says. “We’re doing a deal with no attrition, and the businesses collectively are really in a good place.”

Between the respective apps and a new “Shopper Consideration Platform” catering to retailers and CPG brands that was also announced on Tuesday, the merged entity will possess the ability to reach every household in North America, says Silverman.

The Shopper Consideration Platform will enable retailers and individual brands to connect with consumers via what Silverman describes as “valuable content” that will be delivered in partnership with a roster of undisclosed publisher partners.

“We don’t do ads, we do experiences,” says Silverman, who says the content is designed to help consumers make informed decisions about where to shop and what to buy.

Flipp will continue to operate reebee as a separate entity rather than fold it into its existing brand, says Silverman. “These are two of the most trusted shopping brands in Canada, and we want to leverage that,” he says.

“We have a devout audience on our respective apps, and we wanted to make the most of both of those instead of shortchanging [ourselves] or our customers by trying too hard to merge two experiences,” he says.

The move comes as Canadians are increasingly turning to flyers in an effort to fight back rising grocery prices. According to an April Statistics Canada report, grocery prices have increased by 5% or more for five months in a row. By comparison there were only five such increases between 2010 and 2020. Canadians paid 9.7% more for groceries in April compared with the same period last year, the largest year-over-year increase since 1981.

Silverman says Canadians spend an average of four hours per week perusing flyers and deciding what and where to buy, with 80% of shopping decisions made prior to entering the store.

“Joining forces with Flipp was the next logical phase in our journey to support shoppers, retailers, and brands,” said reebee co-founder Tobias Dankiewicz, in a release. “Flipp’s platform tools combined with reebee’s trusted brand will allow us to help retailers and brands efficiently deliver valuable content to millions of Canadian shoppers.”