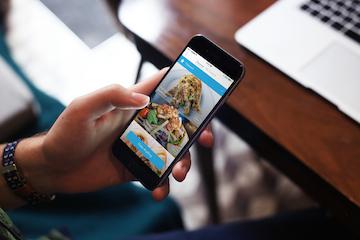 The app-based company, which launched in 2013 and recently raised US$13 million in series A funding, promises to deliver anything–including groceries–to households in the metro Toronto area between 11 a.m. and 9 p.m. daily.

Canadian Grocer spoke with co-founder and CEO Ben Doherty about the new service and its Canadian plans.

Growing up, we were best friends in high school. We worked together at a small restaurant delivering pizzas. One day we had an idea: What if there was a way to deliver from any local store or restaurant?

Honestly, we didn’t know where to start, so in the summer of 2011 we bought a Coding for Dummies book with a few friends. We couldn’t read the 1,000-page book at the same time, so we cut it into pieces using a bread knife and started reading.

Favour from an incubator program called Boost, where we just sold burritos and beer to college students at Cal Poly . Users of this app could push a button for beer, a button for burritos or both, and await their deliveries.

The app was popular, but users wanted more. The beer and burrito service was an outgrowth of our original company, NeighborFavor, which gave people the chance to request favours, such as deliveries and rides, from each other.

Having started with a complex, high-concept model, then going to a stripped down food delivery service, the best of both worlds was found in between—today’s Favour app.

We've seen a lot of activity in the food delivery space in the past 18 months or so with grocery delivery services such as Instacart. What is fuelling that growth, and what is Favour's unique selling proposition among these services?

GrubHub CEO and co-founder Matt Maloney said in an interview with Closing Bell that the takeout market is worth $70 billion annually.They are the biggest player in the U.S., and on track to process $3 billion this year. It sounds like a big number that’s only the existing takeout market. It’s significantly larger as traditional offline phone orders move online.

Approximately $600 million was invested in the delivery space in 2014, more than 13 times the amount invested in 2013. Rapid expansions are happening because the market is massive and largely untapped.

Your press release says "anything delivered," but a quick perusal of your site seems to suggest that it is mostly restaurant related. Can you provide some clarity around that? Are any plans to incorporate grocery delivery?

Favour delivers food from your favourite restaurants, along with dry cleaning, prescriptions, clothing and groceries–whatever your heart desires. The only non-deliverable item is alcohol, which isn’t available. Yet. We take care of those impulse buys or cravings. Did you forget to buy a grocery item on your list or forget an ingredient for a recipe? We'll take care of it for you.

Why did you choose Toronto for your first international expansion, and what are your plans for a future Canadian rollout?

In Toronto, we saw people were increasingly interested in food trends, and restaurants were seeking innovative ways to reach those hungry foodies any time, anywhere. Now, with a few taps, Torontonians can have their favourite curry, sushi or slow-cooked barbecue delivered within an hour.

We are looking at adjacent markets and opportunities in the U.S. but saw Toronto as a massive opportunity that we felt we could tackle easily while focusing on aggressively expanding on the home front.

The efforts behind our rebranding as Favour (the company is adopting the Canadian spelling of "favour"; in the U.S. it's spelled "Favor") are to support our expansion into additional Canadian markets in the near future.

Can you provide a sense about what your current customer base looks like? How many users, average order size, average number of uses per month and such?

What are your growth plans and where do you see the company in, say, five years?

Our goal is to get to 100 cities, and we won't stop until Tokyo.


Do you have exclusive partnerships with merchants? Do they get a portion of the proceeds?

Yes, we are the full delivery and mobile ordering solution. In exchange for paying Favour a commission on total sales they receive insights reporting software; real-time revenue and delivery counts; customer feedback on food and the overall experience; premier placement in the Favour app and a featured menu professional photos of top meals.

The grocery delivery category is quite crowded with the likes of Instacart and Canadian start-ups such as Urbery. What distinguishes Favour in this category?

Favour is more for impulse buys, whereas Instacart is better for those with premeditated purchases.

Can you provide some clarity around delivery prices? Your release says $2, plus 5% of the cost of the items for the first two months. What does it look like after that?

We are still working out our pricing model more updates to come.

Tell me about your delivery people, the "runners," what distinguishes them?

The Favour Runners are the face of the company. We’ve engineered the tools to optimize the delivery process. Runners receive directions, details about the orders, and can communicate directly with customers through texts to let them know wait times and the availability of the requested product.

There’s something special about having these one-on-one conversations happen. Our Favour runners work as your personal assistant.