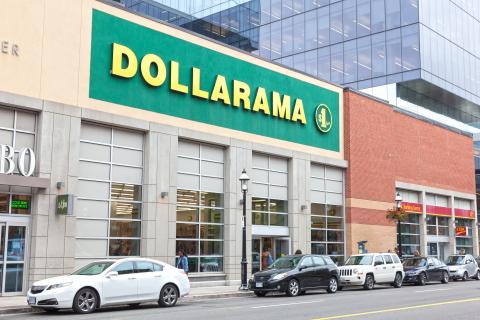 Dollarama Inc. reported its fourth-quarter profit and sales rose compared with a year ago.

Sales totalled $1.22 billion, up from $1.10 billion in the same quarter last year, helped by an increase in the number of stores and a 5.7% uptick in comparable store sales.

This was achieved "while navigating the ebb and flow of the pandemic's impacts on retailers and consumer shopping patterns and in the context of supply chain and inflationary pressures," Neil Rossy, Dollarama president and CEO, said in a statement.

The gradual easing of pandemic restrictions appeared to influence shopping habits at the retailer during the quarter.

The company says it saw a 10.1% increase in the number of transactions and a 4% drop in the average transaction size, suggesting customers were shopping more frequently but buying less with each store visit.

Still, Dollarama says overall sales and comparable store sales for the quarter were dampened by the impact of the Omicron variant on shopping patterns and by COVID-related provincial restrictions.

Those restrictions tightened across Canada in the weeks leading up to the holidays and carried into the month of January—a critical sales period for Dollarama's seasonal items and products related to celebrations like Christmas and New Year's Eve.

In the coming months the company says it expects to benefit from a positive sales environment compared with the same period last year. However, it cautioned that supply chain and other inflationary pressures are expected to be felt more this year.

Dollarama says it expects its new warehouse in Laval, Que., to open by the end of its current fiscal year, increasing its storage capacity and supporting it's long-term target of 2,000 stores in Canada by 2031.

Dollarama opened 24 net new stores in the quarter, for a total of 1,421 stores at the end of January.

Meanwhile, the dollar store retail chain says it will roll out additional price points up to $5 to maintain and enhance its product assortment and value.