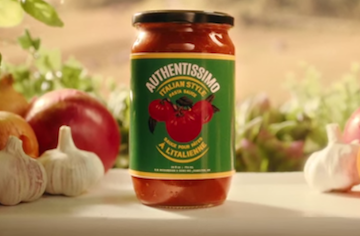 That jar of pasta sauce in your cupboard has an Italian-sounding name, but is it actually Italian? That’s the key question the Italian Trade Commission is raising with consumers in a new campaign that explores flavour, food and authenticity. Created by Sid Lee, the first phase of the campaign includes a video spot featuring a phony Italian pasta sauce called “Authentissimo”—complete with a phony ad that stars a phony grandmother. “This first phase is really about raising awareness to the fact that Canadians are getting duped when products seem to be Italian when they aren’t,” said Sid Lee Toronto’s Joseph Barbieri in an email to Canadian Grocer's sister publication Marketing. “So we’re really looking to help educate and inform Canadians that there is a difference, and that difference matters when you are looking for authenticity and taste.” https://youtu.be/s_5OkTViEEQ Sid Lee was picked as the AOR for the Italian Trade Commission back in January. Launched in April, the campaign is the largest-ever mounted by the trade commission. The campaign was crafted after the ITC found Canadians were spending about $3.6 billion each year on foods with Italian-sounding names—money that Italy’s agriculture industry is missing out on. “It is also part of a broader ‘Made in Italy’ campaign by the Italian Ministry of Agriculture and Ministry of Economic Development that will include the U.S. market,” said Barbieri, who is managing director, content and media partnerships at Sid Lee Toronto. Barbieri added that the first steps are focused on the digital and content side with a website, blog, and newsletter bolstering video spots and a social campaign. The target audience is consumers looking to learn more about where their products come from, and how they are made. “The (fake sauce) video spot is a light-hearted take directed squarely at those who would believe that ‘Italian sounding’ products of false heritage are the same as the real thing,” said Barbieri. The website also features some clever sloganeering, such as “Italian cheeses have more look-alikes than Elvis Presley,” and “Real Asiago cheese is made on a mountain in Italy. Don’t settle for foothills of North America.” Barbieri noted that blogs, published to Facebook and to the official website, are designed to be educational, with a focus on specific products and regions in Italy. “There have been 1,152 total likes, comments and shares on content with over 2,100 fans acquired,” he said. Meanwhile, the fake ad for “Authentissimo” sauce has garnered more than 100,000 views on Youtube. Barberi said taking stock of the campaign’s success on an import level will come down the road, but for now, raising awareness is key. “There are a lot of wonderful non-Italian foods, but when Canadians are looking to capture the essence of a great Italian meal, nothing can replace the character and taste of true made in Italy products. That is the story we’re telling.” This article first appeared on MarketingMag.ca