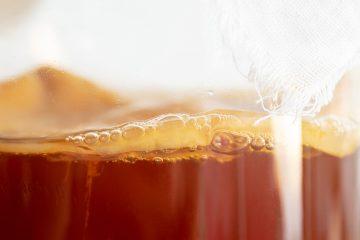 Every day, Robin Sukhram hears customers asking “what’s new?” in the beverage section. “Then I see their jaws dropping, and it’s a good feeling to know that we’ve actually gone out and sourced items for them to discover,” he says. Sukhram is store manager of McEwan Yonge & Bloor, the McEwan Group’s 17,000-sq.-ft. store located at one of Toronto’s busiest intersections.

“Overall, we’ve seen a pretty good success rate in our drink category,” says Sukhram, adding that the store’s largely millennial, knowledgeable clientele are seeking healthy, high-quality products with grab-and-go convenience, presented in new and surprising ways. Beverages that go well beyond refreshment now act as meal replacements, and consumers are turning to drinks as a fast and easy way to meet their daily nutrient needs.

“The way we look at beverages has really changed,” says Jo-Ann McArthur, president of Nourish Food Marketing. “We now see beverages as possible snack or meal replacements, and they’ve taken an expanded role in our lives. So, it’s okay to go into meetings or lecture halls with a drink in your hand, and that never used to be the case. The younger you are, the higher the need for portability.”

According to Ipsos research, the “top over-developed needs prompting new beverage innovation choice” are: hydration; it’s healthy and nutritious; it doesn’t make me feel guilty; it’s pure and natural/made with real food ingredients; it fits my diet; it feels like an ethical choice; it helps me recover after physical exertion; it’s premium, with high-quality ingredients; it’s fresh or less processed; it makes me fit in; and it’s cool, fashionable and trendy.

Cool coffee and tea
Coffee and tea consistently top lists of consumers’ preferred beverages, so it’s no surprise the category was an early adapter to RTD formats. That said, sugary specialty coffee concoctions and artificially sweetened iced teas have given way to craft-style cold brew coffee and iced herbal teas with wellness benefits.

“RTD coffee is small but growing,” says Perrotta, adding the category now represents 0.8% of commercial beverages in overall “share of throat” (CB share of throat)—a percentage of all beverages consumed in an average day—at grocery, a 0.4% jump from 2018. “ also playing a really big role in our robust snacking behaviour as a nice indulgence between meals that’s tasty and satisfying but that also offers energy and satiety.”

Station Cold Brew Coffee was one of the first Canadian RTD cold brew coffees to hit grocery shelves in 2013. The company uses organic, fairtrade coffee, which is brewed in cold water for 18 hours then infused with nitrogen, making Station Cold Brew less acidic and bitter than some canned coffees. Even without dairy, and just five grams of organic cane sugar, the coffees are “smoother and cleaner tasting” than higher-calorie rivals, says co-founder Mitchell Stern. “It’s a permissible energy boost—we like to use the term guilt-reduction.”

As the cold brew category moves to mainstream, producers are widening their offerings by adding fibre, protein and dairy alternatives. “Oat beverage is quickly becoming quite popular and is expanding outside of the milk alternative category and showing up in other beverages, such as being combined with cold brew coffee to make lattes,” says Rob Luscombe, senior buyer at Whole Foods Market. “We are also starting to see mushrooms and adaptogens show up in beverages such as RTD teas.”

Non-traditional iced teas packed with functional benefits include Spruce Tip Tea (a citrusy blend of wild harvested spruce tips and organic honey) from B.C.’s GnuSanté; and That Dam Tea, an iced blend of black tea and damiana, a herb native to Mexico, with 25 mg of caffeine. “Damiana has traditionally been used for a wide variety of uses. We use it as an enlivening tea,” explains Tyler Steeves, founder of That Dam Tea and owner of the brand’s parent company, Longevity Ventures.

Station Cold Brew also recently released Cascara Sparkling Iced Tea, produced from the shell of the coffee bean—something that had previously been discarded or used for livestock. “It’s high in nutrients, has a ton of antioxidants and potassium, and we’ve carbonated it so it’s sparkling,” says Stern. The 355-mL cans, with about 50 mg of caffeine per can, come in original, lemon and grapefruit varieties.

Because many of these beverages will be unfamiliar to customers, Luscombe says in-store demos are key. “Demos that provide information about the unique features of these products also help to facilitate the education that’s required to get new consumers to trial.”

That gut feeling
Kombucha, a fermented tea made with probiotics, has been consumed for centuries as a digestive aid and health restorative. It’s been on the market in the natural health channel for almost a decade, and as it finds a space in mainstream grocery, brands are battling it out for attention.

“Beverages are looking even more medicinal in terms of consumers wanting more out of them for their health,” says Perrotta. “Gut health is the largest metabolic reason people choose a beverage, but there are others growing in prominence. The biggest opportunity in the future will be this notion of personal wellness.” Ipsos figures show kombucha now represents 0.7% of CB share of throat, up 0.3% since 2018.

When Montreal’s Rise Kombucha launched in 2008, the drink was new to grocery. “Buyers didn’t know where to place us in the store,” recalls David Côté, co-founder of Rise Kombucha and LOOP Mission. “Within the last four years, way more products have started to appear, so now there’s a kombucha category and fridge in most stores.” Rise comes in eight flavours, including new Lychee & Jasmine, and Orange & Turmeric. “Citizens want to be healthy, but they don’t want to compromise on taste,” says Côté. “Kombucha tastes amazing; it’s fizzy, fun, you can mix it with alcohol, and you still get all the nutrients out of it.”

Tonica Kombucha is produced in craft-style batches from certified organic ingredients, slow-fermented naturally without any synthetic probiotics or vinegars to maintain the live yeast and probiotic. “We have customers who buy it for the health benefits, and others who drink it because it’s low sugar, it’s natural and they like the taste—it tastes a bit like a soda,” says the Toronto-based company’s founder Zoey Shamai. The six varieties are available in 350-mL bottles, with top-sellers—blueberry, ginger and peach—also available in one-litre bottles. The company’s new line of Supertonics pushes the boundaries of kombucha, with fruit blends like Goji Grapefruit and Turmeric Lime.

“Right now, there’s an oversaturation of kombucha brands in the Canadian market, and grocers are seeing that it’s really cannibalizing,” says Shamai. “A lot of brands will probably fall off in the next few years, and those of us who have a really good customer base, great flavour and authentic benefits, we’ll stay.”

Mike Dziadyk, space and category management director at Quality Foods, says kombucha is the largest-selling segment of its functional beverage section. The chain, which has 13 stores on Vancouver Island, offers standalone fridges dedicated to innovative and local beverages, including kombucha. “People are also realizing that some brands have a fair amount of sugar, so we’re also bringing in sugar-free kombucha, which I think will do well.”

Hydration-plus
“As we’ve seen sodas fall off, we’ve seen a huge rise in functional water,” says Nourish’s McArthur. “There’s such a trend among consumers to be hydrated and to have more functional benefits in your refreshment.”

Some functional waters currently on the market contain caffeine for energy, collagen for healthy skin, melatonin to promote better sleep, activated charcoal to detoxify, and alkaline waters as a source of electrolytes. “This time next year, we could also be seeing a whole generation of CBD beverages that are going to espouse new benefits,” adds Perrotta. Functional waters now hold 0.7% of CB share of throat (up from 0.4% in 2018), according to Ipsos, while sparkling water makes up 2.2%.

“Part of the success of sparkling water is that it’s a better way to get the bubbly,” says Perrotta. “Sparkling water also comes in when we talk about enjoyment and permissibility.” Because younger demographics are drinking less alcohol, McArthur says they’re instead searching for unique beverages like sparkling and flavoured water to take with them to celebrations (in lieu of things like champagne), and to display on social media.

TreeWell Sparkling Oak-Infused Maple Sap by Longevity Ventures is a non- alcoholic, “uniquely Canadian champagne for people who don’t drink,” says Steeves. A 750-mL bottle of TreeWell comes adorned with a handmade coaster. With manganese, zinc and iron, TreeWell has “a subtle yet sweet maple flavour. It has the nuance of a good wine, and yet it’s also refreshing,” he says.

GnuSanté’s 52° North Birch Water is made with 100% pure B.C. birch sap, which is naturally high in antioxidants, electrolytes and protein. “But really the exciting part is the phytonutrients that come directly from the tree,” explains co-owner Sarah Wall. While GnuSanté supplies many sports teams and professional athletes, Wall says “the broadest group of consumers are people looking for a plant-based hydrator that is healthier than the alternative, both physiologically and environmentally.” 52° North Birch Water is available in an unflavoured variety, as well as four flavours containing 95% sap and 5% organic juice: cranberry, cucumber, blackcurrant and raspberry. A ginger variety is due to launch next spring.

McArthur says “sampling and tasting is always believing in this category,” and McEwan’s Sukhram agrees: “Because there is quite a bit of the market that is uneducated on the benefits of these products, we promote sampling, tasting and demos.” Packaging plays a role, too. “A lot of smart companies are educating consumers on the package,” explains Sukhram. “So, I look for products with information on the package to help push the consumer with purchasing.”

Drink your fruits and veggies
Consumers already recognize the benefits of drinking their daily fruit. What they may not be familiar with is the cold-pressed process, which extracts juice without using heat, preserving more nutrients and flavour from the raw produce. These juices combine superfruits, vegetables, spices and a host of immune-boosting nutrients. Although Ipsos research shows premium raw and cold-pressed juices comprise just 0.5% of CB share of throat at grocery, that’s likely to grow.

“People are definitely moving towards cold-pressed and raw juices just for the health and nutrient value of it, and if you can get your full serving of vegetables in a drink, it makes it pretty convenient,” says Dziadyk. At Quality Foods, shoppers from age 25 to 45 are often “looking for quick morning nutrition, so they’re grabbing a cold-pressed juice and away they go.” Dziadyk admits that when the beverages first hit the market, the price point was surprising for some customers. “When they first see an $8 juice on the shelf, it’s going to raise some eyebrows, but as they become more popular people are realizing exactly what it is they’re paying for, and they’re willing to pay for it.”

“Sustainability also plays a part in our beverage choices,” adds Perrotta, noting this is particularly true in the juice category and with younger consumers. “Grocers can’t forget that they want things that are good internally and externally.”

Sustainability is at the heart of LOOP Mission; its LOOP Juices are made with fruit and vegetables diverted from waste by Montreal produce wholesaler Courchesne Larose. “They throw out more than 16 tons of fruit and vegetables every single day for a variety of reasons, including ripeness and aesthetics of the produce,” explains Côté. “Compared to any other business model in the juicing world, we don’t have to aim at the less-expensive product to make our juices profitable. It allowed us to disrupt the market a bit when we launched in 2016. We forced our competitors to bring the prices down, and we opened the market to a wider audience.”

It also means LOOP can offer 12 flavours, as well as seasonal varieties, featuring ingredients that are often too expensive to include in commercial juices such as fennel, yellow pepper, pineapple, parsley, turmeric and jalapenos. Each bottle of LOOP contains 1.5 kilograms of produce.