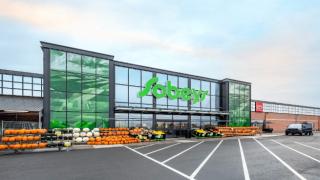 After becoming the first national grocery retailer to eliminate single-use plastic bags and on the heels of the successful Plastic Waste Challenge, Sobeys is setting its sights on a next-level plan to support Canada's transition to a low-carbon economy.

To do so, parent company Empire is enacting science-based targets in line with the 2015 Paris Agreement to limit global warming to 1.5 degrees Celsius by 2050.

With guidance from the Science Based Targets initiative, key initiatives will be electrifying delivery and fleet vehicles, installing rooftop solar panels as well as lighting and refrigeration retrofits. Empire will also work with its supply-chain community to enact similar changes and reduce emissions from fuel sold at filling stations.

“We know that now is the time to act on the climate crisis. Committing to concrete, science-based targets is the way we will make a difference,” said Michael Medline, president & CEO, Empire, in a press release.

That difference will begin with Empire reducing its direct (Scope 1) and indirect (Scope 2) emissions by 5% a year through 2030. It will also work with its suppliers (Scope 3) to ensure that 62% of them set science-based reduction targets on their own Scopes 1 and 2 emissions and commit to at least a 28% reduction in emissions from fuel sold by 2030.

The end goal for Empire is to achieve net-zero emissions by 2040 for Scopes 1 and 2 and net zero for Scope 3 by 2050.  Read more about Sobeys’ climate action plan here.

Empire is also launching an all-encompassing Sustainable Business Council in fiscal 2023, which will include real estate, supply chain and logistics, sourcing and merchandising, and fuel. Its mandate will be to ensure accurate accounting of carbon emissions for internal monitoring and external reporting.

The company will also enhance reporting by aligning its external disclosures with recommendations from the Task Force on Climate-Related Financial Disclosures, which top organizations use to identify, assess and manage climate-related risks.

“I am really excited about the road ahead,” said Mohit Grover, Empire's SVP innovation, sustainability & strategy. "Through our work on climate, we will uphold our values and commitment to sustainability.”