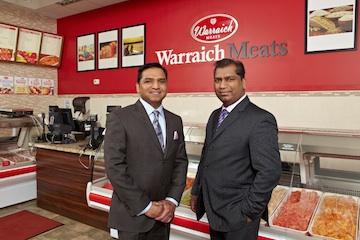 Sam Warraich’s secret weapon was his grandmother. Back in the Punjab province of northern India, she prepared chicken in various dishes, including tandoori chicken, lemon wings and Afghan chicken.

Grandma’s creations were marinated with pungent spices that Sam and his younger brother, Surinder, started selling in 2002 to the large South Asian population in Brampton, northwest of Toronto.

Today, some of these spices have made their way into Warraich Meats, a chain of seven stores that have blossomed into the M&M Meat Shops of South Asian Canada.

From opening day, Warraich Meats has been a family business. “Dad was involved in the back of the shop to supervise the recipes,” recalls Sam. “Like deciding how much of each spice there should be.”

The brothers invested $75,000 of their savings and targeted their community. “We were putting ads in local Punjabi newspapers and radio. Still do,” says Sam. The marketing strategy worked and drew in customers, but the brothers started small, with only three employees working a single counter in their 1,050-square-foot store.

“It took a long time to recoup,” says Sam. “We were struggling in 2002 and it was difficult to pay the rent.”

Ironically, the Warraich brothers got into the meat business by accident. Sam was a technician for auto-parts giant Magna International and Surinder worked for Air Canada until both were laid off during the post-9-11 recession.

Discouraged by bleak employment prospects, Surinder suggested they open a business together. “Maybe it’s a good opportunity to try something new,” he reasoned. A real estate agent showed them empty storefronts in Brampton, and the brothers determined there was room to enter the meat market. “In pizza there’s a lot of competition,” notes Sam.

By 2003, the brothers started making money. The turning point came during a heat wave that July. “It was our first sold-out day,” recalls Sam. “It was humid and sunny–barbecue season. We sold everything, and even had to call the supplier for more meats.” By 2004, they were renovating the store, and the following year they opened a second location in Brampton.

Warraich’s secret recipes create return customers, with service winning them over. “If you work for me, the first thing I tell you is to talk to customers with nice manners,” explains Sam. “You greet a customer in Punjabi ‘sat sri akal’ with a smile.” What also distinguishes Warriach from its competitors is that their counters are staffed entirely by women. “Other South Asian meat shops have guys in untidy uniforms,” notes Sam.

Warraich not only weathered the recent recession, but started franchising in 2008, and two years later opened a shop that sold cooked as well as marinated meat.

In 2011, the brothers opened three more locations. Sam was afraid of saturation, but to his surprise, Warraich has kept gaining new customers, and not only South Asian. “In the early days, 10 to 15 per cent of our customers were not South Asian,” says Sam. “Now, it’s 20 to 25.”

Warraich’s growth mirrors the rise of the South Asian population. Asian populations, like Chinese and Filipino, are the No. 1 market in Canada, explains B. K. Sethi, who has been marketing South Asian food in this country for 32 years. “But South Asians are a close second and are becoming more mainstream.”

More than half of metro Toronto is “ethnic,” and roughly 80 per cent are Asian or South Asian who boast education and income levels above the national average.  Meanwhile, the rest of Canada is growing more worldly.

“Canadians travel to Jamaica, Hong Kong or Mexico and taste the food,” explains Sethi. “They’re not just going to Halifax or Manitoba anymore.”

As more immigrants settle in centres like Toronto, Sethi notices a “rubbing effect” happening among groups. “Your child may come home and say that his friend Mike gave him perogies for lunch, so now he wants you to make them.” Because of the Internet, it’s easier than ever to look up those recipes or find shops offering those foods.

Sam’s dream is to get Warraich’s products into a supermarket chain. “We would consider it in a few of our buildings,” says Marc-André Bally, who buys food for Costco’s stores in eastern Canada. He may place one or two of Warraich’s bestselling items in Costco stores.

Bally agrees with Sethi that travel and immigration are driving the appetite for international foods, but he adds that specialty TV channels like the Food Network “contribute to why people want to experiment and try new food.”

Sam also envisions a Warraich restaurant complete with a patio. First, however, the brothers want to purchase a warehouse to centralize their product and open stores in new areas. “My dream is for the right franchisee to come along and open in downtown Toronto.”

Grandma would be proud.