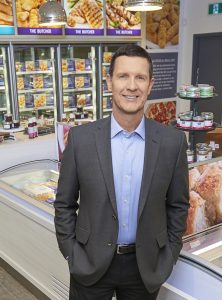 When Andy O'Brien took over as CEO
of M&M Meat Shops in 2014, the brand was noticeably tired. Not much had changed since the 1980s and ’90s for M&M, which had become best known for its frozen appetizers. O’Brien quickly went to work on a major brand transformation, including a completely revamped store design, a significant number of new products, the removal of artificial colours, flavours and sweeteners from all the products, and a name change to M&M Food Market. Canadian Grocer recently caught up with O’Brien to find out how M&M’s extreme makeover has been progressing.

Why was this transformation necessary?
When I arrived in 2014, it was clear that M&M had really fallen off pace with the market. Whenever you talked with someone, they’d be like “Oh, M&M? I haven’t been there in a while.” It wasn’t relevant anymore. So we needed a radical change across the business.

What was your “vision” for the process?
We wanted to still be known as the destination for entertainment food, but also for everyday value-added meals for people who are “time poor.” Maybe they’ve got two kids and one’s in dance and one’s in hockey, and they need to put a quality meal on the table in under 30 minutes. They’re looking for something to help them in their busy lives, but they don’t want to sacrifice quality. We knew our food really could be positioned that way, so we came up with a new brand positioning around helping you make real food for real life. 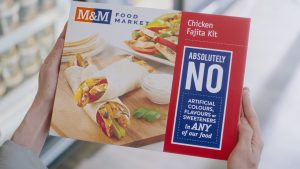 How did you achieve this?
There were several key pillars that we focused on. The first one was around making sure we had the right team in place, both at head office and at the store level. The second was around the food portfolio. We did an inventory of all of our food and, quite frankly, we discontinued probably 20% of it within the first six months because it didn’t fit with where we were going. And we identified probably 200 to 300 products that over the next couple of years we would have to be bringing forward to the marketplace. We brought in meal kits, new soups and sauces, new appetizers, smaller packs, single-serve proteins, new desserts, a number of gluten-free products ... Every quarter we’re launching probably 25 to 40 new products. We also removed all artificial colours, flavours and sweeteners from all of our products.
The third pillar was our in-store environment. We spent a lot of time in research with design teams figuring out the right design for us. There were a couple of major design elements consumers wanted us to change. First and foremost, they wanted the counter removed. <Previously M&M had a service counter separating customers from the product-filled freezers; customers had to walk up to the counter to request their products from an M&M staff member.> They love the aspect of having service, but they wanted it on their own time. So we didn’t want to lose that service element, but we wanted to give consumers the freedom and flexibility to roam about the store. Also, there was the packaging—everything was in white boxes before. Those white boxes were fantastic in the 1980s, but a lot has changed since then. We really elicit a lot more food appeal now through our redesigned boxes. And it’s much easier to shop our store now. When you walk in, you’re basically walking through in the order of how you would have a meal. As you walk you can go, “OK, I’ve got my appetizer, I’ve got my mains, I’ve got my sides, what’s for dessert?” It makes the in-store experience much better.
The fourth thing was what I call optimizing the network. And that means moving stores around, and making sure we have the right stores in the right place. We didn’t have a lot of stores in urban areas, so we’ve been focusing on developing urban areas where a lot of younger people are living.

How have things been going so far?
We’re very happy. We’ve been able to improve the profitability of our franchisees. We’re opening new stores, which M&M hasn’t done since 2005. So we’re very pleased with the results. Now, I have to say it took us a significant amount of investment to get things right and figure this out. It wasn’t taken lightly. Between the research, the store remodelling, the renovations, and moving the head office from Kitchener-Waterloo to Mississauga, Ont., it was a $20-million investment. So yes, we’re happy with the progress, but it came with significant investment behind it with a lot of great people.

How many stores have been transformed?
We’re now at 100 . It took us about a year to 18 months to figure out the design. Then we got the design in market, and had to test it a bit to make sure it was getting the results we thought it would. And it did; it’s providing significant lift factor for the stores. Consumers love it. It’s bringing back people that haven’t shopped there in a while, and the people that have been shopping come back more often. So in the last 24 months, we’ve got 100 stores , and we’re trying for an average of five per month right now.

How do you see M&M evolving?
I think we’re perfectly poised for growth. Over the next five years I see not only growth in the penetration of the stores and an evolution of the food portfolio, but also an increase in utilizing technology for whatever it might be—whether it be click and collect or delivery, or just as a platform to share information about our food.

This article appeared in Canadian Grocer’s May 2018 issue.