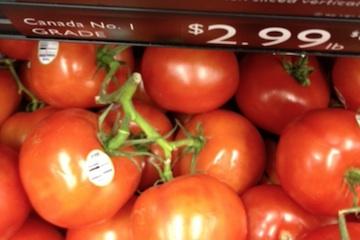 Tomatoes are exploding. And we don’t mean in a “cleanup in produce, grab the mop” kind of way. We’re talking variety and store real estate.

“A decade ago stores had perhaps three to four types of tomatoes. Today it’s more like eight or 10,” says Jeff Madu, sales director at Windset Farms, a produce company in Delta, B.C.

Big old tomato standbys such as beefsteak still get room on shelves. But today it’s grape, cherry and other small varieties getting the most attention.

“These varieties have a lot of flavour to them,” says Will Willemsen, owner of Sunripe, a two-store grocer in southwestern Ontario. Yellow, orange and heirloom tomatoes are also increasingly popular choices.

As for heirlooms, they may never become more than a novelty, but many consumers are looking past their ugly complexions and high price points. “Heirlooms have a unique flavour and in tomatoes that’s what’s driving sales now,” Willemsen says.

What else is driving the tomato category today? Here are five trends:

Some Sobeys Compliments tomato packs come with an “Ideal for...” sticker. It helps consumers determine whether the type of tomato is best suited for snacking, salads, cooking or making bruschetta or salsa.

Shoppers looking for more local: Growing tomatoes in Canada in January is tough, but not impossible. With consumers queuing up for everything local, tomato growers are finding ways to ship to supermarkets all year long. This winter, greenhouse grower Houweling’s in Delta, B.C., added grow lights to five acres, allowing it to grow tomatoes all winter. Previously, the growing season ran March to November.

Tomatoes: bite-sized and ready to eat anytime: It’s official: Tomatoes are now a snack all on their own. No wonder many stores are putting packages of grape tomatoes and loose tomatoes on the vine right at the front of the store, where customers walk in. “we’re seeing more people eat a tomato out of hand like a chip or an apple,” says Dwayne Buttler, produce buyer at Pete’s Frootique in Nova Scotia.

Back in black: Most of the world’s 5,000 types of heirloom tomatoes will never make it to supermarkets, but a few, like black tomatoes, are turning heads among tomato pros. Black tomato varieties (they’re usually deep purple or brown, not black) are prized for their bold, earthy flavour. “They’re like a fine Burgundy wine,” says Steve Goto, a tomato expert in California who teaches how to grow heir- loom varieties.

The power of lycopene: Tomatoes don’t have superfruit status, but researchers are uncovering surprising health benefits from lycopene, the antioxidant that gives some tomatoes a deep red hue. Lycopene is believed to help protect against prostate cancer and heart disease. It may also make us happier. A recent study found that people who eat tomatoes two to six times a week are 46 per cent less likely to develop depression than once-a-week tomato eaters.