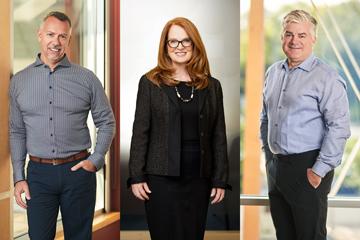 One is president of a long-standing egg business known for its sustainability and innovation; the other two are leaders of a rapidly growing and successful fresh market-style grocery chain. All three, of course, are shining examples of excellence in the grocery and CPG industries. The Golden Pencil Awards have been presented by the Food Industry Association of Canada since 1957 to recognize individuals who have made lasting contributions to the Canadian food industry and their communities. Read on to learn more about 2020’s winners: Jean-Louis Bellemare, Margaret Hudson and Jeff York.

Jean-Louis Bellemare grew up in the world of produce. His father owned a wholesale produce business, so he was immersed in it from a very young age. In 1981, while still in his teens, he opened his own business: a 300-sq.-ft. produce-only grocery store in Cornwall, in Eastern Ontario. “At the age of 18 years old, I started my first Farm Boy store with my wife—who was back then my girlfriend—and from there, my career path has been all about growing the Farm Boy business,” says Bellemare.
 
Nearly 40 years later, Farm Boy now has 33 locations across Ontario, with another 10 locations slated to open by the end of 2021. In 2018, the grocery chain was acquired by Sobeys’ parent Empire Company, which has let Farm Boy continue to follow its own special formula for success, without making any major changes to the brand—a brand that’s become well known for its fresh market experience and highly sought-after private-label offerings.

Bellemare says Farm Boy’s growth in the past decade or so (and particularly its expansion outside of the Ottawa area to other Ontario markets such as Toronto, Kingston, London, Kitchener, Whitby, Burlington and more) is something he’s immensely proud of. “We were a little local company, and then we pushed ourselves ... We eventually said, ‘Well, we have to take this model and bring it to cities that are further out than Ottawa or Cornwall,’” he says. “I’m proud of that. I think it was something that pushed me out of my comfort zone, going to markets that were further out, without losing what Farm Boy was. I think that was a big accomplishment.”

When asked what’s kept him engaged and working hard at Farm Boy’s success for all these years, Bellemare credits his passion for the industry. “When you’re really passionate about something, I think the work ethic comes a lot easier,” he says. “It’s a very fast-paced business. It’s a very colourful business. I love going into the stores and being surrounded with all the food and the colours and the people. And it’s exciting. It’s vibrant. It’s alive, and it’s something that has always kept me interested.”

“I had two ambitions,” says Margaret Hudson of her earliest career goals. “One was to carry on the family business, and the other was to do something positive for the environment.” Over her 30 plus years at Burnbrae Farms, Hudson has doggedly pursued both goals. Family owned and operated since it was founded in 1891 on an Eastern Ontario farm, Burnbrae Farms today is one of the leading producers and marketers of eggs in Canada with operations in five provinces.

Continual investment and a focus on innovation have contributed to Burnbrae’s long-standing success. And Hudson says one of the things she’s most proud of is the innovation that has helped transform the egg case. Among the innovations she’s ushered in: omega-3 eggs (in 1996), free run/cage-free eggs (1998) and organic eggs (2000). Liquid egg whites were launched in 1997 as a clever way to use egg whites left over from mayonnaise production (which only required yolks). More recent innovations include flavoured hard-boiled eggs and Egg Bakes!

Innovation under Hudson’s watch also extended to sustainable solutions. In 1996, Burnbrae launched a 100% post-consumer recycled egg carton. “It was a really beautiful moment for me when I realized that some of those ambitions I had early on, to have an impact on the environment in a positive way, could actually play out at work,” says Hudson, who studied environmental science at university. Last year, Burnbrae opened Canada’s largest solar-powered egg farm near Woodstock, Ont. and received Ontario’s 2020 Excellence in Agriculture Award for the innovative project.

Hudson credits her upbringing and both parents for her work ethic. “Growing up on a farm, everybody worked,” she says. “Both of my parents were very hard working and driven; my dad (Joe, who received his own Golden Pencil Award in 2001) clearly for the business, and my mother for her family and the community,” she says. Hudson will admit that working within a family business can carry its own unique set of pressures. “You get held to a higher standard and there are a lot of eyes on you,” she says, but on the other hand, “there are a lot of people who want to see you do well.”

Jeff York likes to say he’s an “accidental grocer.” A graduate of Princeton University with a major in economics, he got into retail in 1989 after working as an auditor for Giant Tiger in Ottawa. “Giant Tiger needed to fix a problem with its warehouse and they wanted a person to come in who was impartial, so I came in on a contract to help,” says York, adding with a laugh, “And then I stayed.” In fact, he stayed at the discount retailer for 20 years, working his way up through the ranks, eventually becoming the company’s president.

York grew Giant Tiger from a regional discount chain with $250 million in sales to a large national brand with locations across the country and $1.3 billion in sales—something he calls one of his greatest career achievements. So when Farm Boy was looking for a new CEO to grow its business in 2009, York seemed a natural choice. With York at the helm, Farm Boy grew from a nine-store chain in the Ottawa region to a 33-store chain with locations across Ontario today, and another 10 set to open by the end of 2021. He’s now partner and special advisor for Farm Boy and its parent company Empire, which acquired Farm Boy in 2018.

As a leader, York favours a positive approach. “I like to get people to believe in themselves and help them become better managers and leaders, and then push them to have a say,” he says. “I like to get them to discuss issues and bring forward their ideas, and get them to feel good about those ideas.”

And while he may have “accidentally” fallen into retail all those years ago, his passion for the grocery industry today is palpable. “I love the resilience of the grocery industry,” says York. “It’s always changing and you’re always adapting to where you think the consumer is going to be, and I love that—getting ahead of the consumer and providing that ‘wow’ in the store. That’s how we do it at Farm Boy; we want to have a great customer experience and great food. It’s not about ‘good.’ It’s about ‘great.’”