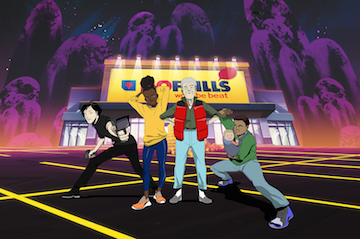 Its name bluntly lays out its bare-bones approach to grocery retailing, but No Frills is taking a decidedly unconventional—some might even call it frilly—approach to marketing that has garnered the attention of Canadians.

Introduced late last year, the discount banner’s “Haulerverse” campaign was a hit on Twitter in mid-January, with people taking to the social platform to express their admiration—and, yes, some dislike—for ads featuring No Frills shoppers and employees in the guise of animated superheroes. Many of the tweets said No Frills had “upped its game,” with one even hailing the campaign as “the coolest ad ever for a grocery store.”

A stylistic nod to the popular Marvel Comics universe, the Haulerverse characters eschew potential names like Discountman in favour of, well, decidedly no frills names like Meg, Nia, Jeff and Hank. Compared to their big-screen counterparts, their skills were similarly pedestrian too: digital deal hunter, baby-carrying budget boss, a price-gun wielding “deal slinger” and an elderly “OG” hauler who knows the “ins and outs of savvy shopping.”

In the latest iteration of the campaign, No Frills has migrated the Haulerverse universe to its weekly digital flyer in the form of a continuing comic strip focusing on what it describes as “the battle between spending and saving.”

In an email interview, No Frills brand director Ashley McGill said the discount banner had traditionally favoured an “unusual approach” to marketing in what is generally a risk-averse category, and the strategy had been paying off.

“Every week is a new story in the digital flyer for Canadians to feel a part of the Haulerverse, creating a world that people want to talk about, which has been incredibly exciting for the team,” she said.

Grocery store advertising has traditionally emphasized marketing fundamentals such as product and price, containing little in the way of brand-building. The latter is particularly true in the discount sector. But, McGill said the pandemic has changed the way people are shopping, and that deal-hunting—traditionally one of the hallmarks of the No Frills experience—has taken a back seat to factors such as safety and convenience.

“We needed to override some of those behaviours and remind consumers why they shop at No Frills in the first place,” said McGill. The campaign is intended to show No Frills customers, which the banner has been referring to as “haulers,” that they should “continue to wear their savvy shopping habits as a badge of honour,” she said.

No Frills paid particular attention to ensuring its customers saw themselves reflected in its Haulers platform, which McGill said likely played a big part in the program’s success. “It’s been great to see people share the campaign video, follow along with our weekly comic, take the quiz to find out which Hauler they are and even talk about their own search for the perfect deal on social,” she said.

The nearly two-year-old “Haulers” platform has seen the banner push into other cultural channels typically unthinkable for grocery retail, including video games (2019’s online game Aisles of Glory) and music (last year’s downloadable album Haulin’ State of Mind, which it later turned into a physical LP).

It’s unclear where No Frills will take the Haulers platform next, said McGill, but the goal is to create similarly impactful marketing. “As with any brand, we’re hopeful that the programs and campaigns we produce will resonate with consumers.”