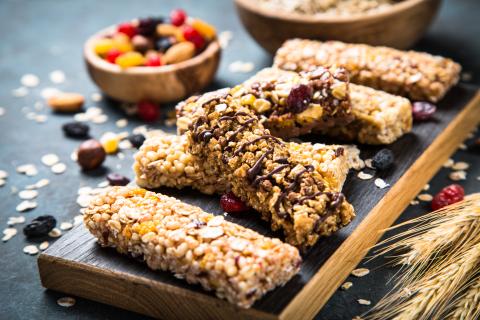 Demand for healthy snacks is growing, as consumers seek out better-for-you ways to satiate their cravings. Research from NielsenIQ reveals many snack categories saw increased sales over the past year in Canada, including healthier options like “snacking fruits, nuts and seeds,” which grew by 15% to $949 million, and “puffed cakes” (such as rice cakes), which grew by 18% to $102 million. And globally, the healthy snacks market is forecast to reach $98 billion by 2025, growing at a CAGR of 5.8% between 2020 and 2025, according to Euromonitor International.

As more proof of better-for-you snacking’s popularity, even heavyweight companies like Mondelēz and Mars are eager to get in on the action. Earlier this year, Mondelēz International acquired Hu Products, which specializes in vegan and paleo-friendly chocolate bars; while Mars acquired healthy snack company KIND North America in late 2020.

The growth of the healthy snack category is largely being driven by younger generations, suggests Dana McCauley, director of New Venture Creation at the University of Guelph. By contrast, “baby boomers tend to still eat three meals a day,” she explains.

The pandemic has spurred snacking in general (a 2020 survey from The Hartman Group showed 35% of consumers said they were snacking more often), including healthier options. “Snacking overall as a category has surged because of people being home and able to graze all day versus being in the office or at school,” says Melinda Zoccoli, vice-president marketing and supplier services for United Natural Foods (UNFI).

Zoccoli adds the pandemic has also impacted which healthy snack formats consumers prefer. She notes, for example, that larger, family-size snack formats were more in demand over the past year. Jamie Lee, co-founder of Remix Snacks, has observed a similar trend. “We’ve been seeing less single-serving snacks and people have been buying more bulk items,” she says. “There’s no more need for putting it in your purse or backpack to go to school.”

The pandemic also seems to have fuelled consumer desire for snacks that offer “permissible indulgence,” as Wade Crouch, head of marketing at Riverside Natural Foods (a company with brands that include MadeGood and Good To Go) describes it. “People just want to treat themselves a little, and food is a good comforting factor, especially in these uncertain times,” says Crouch. He says consumers are drawn to snacks that help them achieve their health goals while also satisfying a craving, adding that Riverside has seen an uptick in sales of its chocolate SKUs in recent months as a result of this trend.

Remix’s Lee believes her brand’s high-protein, high-fibre dark chocolate bark products similarly tap into this consumer desire to indulge but with a better-for-you snack. “It still tastes good, yet you’re getting some benefits and it’s keeping you full for longer,” she says.

When it comes to the nutritional benefits consumers are seeking from healthy snacks, high-protein options are among the most popular. “Those diets that people have created tribes around, such as keto and paleo [diets], there are huge snacking innovation opportunities there,” explains McCauley. “They keep launching products, so that does seem like a fairly insatiable market.”

Riverside’s Crouch says Good To Go bars have been a hit with consumers because they’re keto-friendly while also having a cake-like texture that feels like a treat. “It’s low-sugar and keto-friendly but it’s also really honing in on that indulgence trend people are looking for,” he says.
Three Farmers is also doubling down on its high-protein offerings with the launch of its new roasted fava bean products, which feature almost double the amount of protein as the brand’s popular chickpea snacks, according to Vandenhurk. 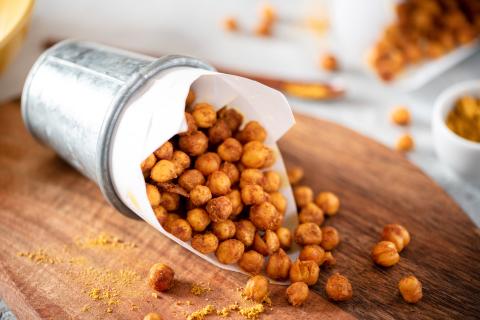 Beyond achieving specific nutritional goals, consumers are increasingly choosing healthy snacks that also offer clean labels and minimally processed ingredients. “People are looking to really understand the ingredients of products and what they’re actually eating and what’s going into their bodies,” says Crouch. MadeGood’s recently-released Star Puffed Crackers, for example, are organic and free from common allergens, both of which are big selling points for consumers. Similarly, Vandenhurk says Three Farmers’ minimal processing resonates with its customers. “We don’t take a bean and turn it into something that it’s not,” she says. “The bean is still the bean. It’s real food from a real farm.”

Three Farmers’ pulses are sourced from Canadian farms, gaining the brand fans among consumers who prioritize local products. “I think consumers are extremely concerned about where their food is coming from,” says Vandenhurk. Three Farmers’ packaging includes information about each product’s traceability, as well as a code that customers can enter via the brand’s website to learn more about where the snack comes from and how it’s made.

George Bachoumis, general manager of McEwan Fine Foods in Toronto, says the pandemic has driven its customers to double down on supporting local products in general, including healthy snacks. “People are trying to support local businesses because of what has been going on. I think it’s across the board,” he says.

Consumers are also showing strong interest in healthy snacks that aren’t just good for their own bodies but are good for the environment, too. “There are a lot of new products coming out that are using what used to be the waste stream of food manufacturing and saying, ‘Hey, what else can we do with this?’” says McCauley. Remix Snacks, for example, uses imperfect, upcycled fruit in its chocolate recipes. “I think something that resonates with customers is our double-sided mission,” Lee explains. “Our label is clean and our other mission is to be as environmentally responsible and as sustainable as possible.”

UNFI’s Zoccoli says this trend towards eco-friendly, healthy snacks extends to packaging, with brands like MakerBars using compostable packaging for their products. “Millennials and gen Z, they’ll pay a little bit more for products that are better for the environment and good for them,” she says.

In-store, showcasing healthy snacks near their traditional counterparts can be a helpful way to convert new customers, says Robin Langford, product category manager for grocery at Ontario’s Goodness Me! Natural Food Market. “That’s based on watching customer patterns, where they move down the aisle and they see, ‘Oh, I don’t always have to grab that bag of chips, maybe I can go with seaweed with a salt and oil base and see how I like that snack,” she says.

Three Farmers’ Vandenhurk says secondary placements for healthy snacks can also be a smart strategy. “The other great place for us is in the produce area,” she says. “Our products are primarily a snack but they’re also a really great gluten-free salad topper option.” Remix’s Lee adds that secondary placements can also serve to highlight the wholesome ingredients found in certain snacks. Putting Remix products in the produce section, she says, can help “play on our upcycled fruit and make that link [for the customer].”

Riverside’s Crouch says that with many grocers continuing to see increasing online sales, it’s important to not overlook online merchandising. He suggests the impulse nature of snack buying can be incorporated into the online experience, perhaps through add-ons or extra purchase suggestions. He also recommends grocers think about the drivers behind healthy snack purchases when marketing these products online, such as desire for sustainable, local products and the benefits of the ingredients. “We’ve found that’s very important to really help shoppers because [when buying online] they can’t touch the product—so the content is key.”