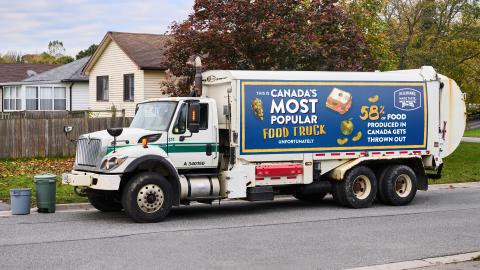 Mayonnaise brand Hellmann’s keeps on trucking along with its efforts to raise awareness of Canada’s massive food waste problem.

As part of a new awareness campaign, the brand is running ads on the side of five garbage trucks in Peterborough, Ont. Running for three months, the ads feature the message: "This is Canada’s most popular food truck. Unfortunately. 58% of food produced in Canada gets thrown out."

“As a food marketer you never say garbage and food in the same sentence,” jokes Gina Kiroff, category marketing director, foods and refreshments (tea) and wellbeing, with Unilever Canada. “It's an awareness driver because half of the battle is just being cognizant of what's happening. The more conversation that’s happening, the more food you can potentially save.”

Garbage trucks are clearly a highly specialized advertising medium, but are a perfect ad vehicle for Hellmann’s ongoing awareness efforts around food waste, which have been a major component of its marketing in recent years.

In 2018, the brand fed fans at a Toronto F.C. game with grocery store food that would have otherwise been thrown out, and last year created Hellmann’s Island in the popular Nintendo game Animal Crossing—in which players were asked to donate their spoiled turnips (which players buy and sell within the game), which were then exchanged for a meal provided by the food rescue charity Second Harvest.

It’s estimated that 58% of all food produced in Canada—roughly 35.5 million tonnes—is lost or wasted each year. That waste contributes to an estimated 56.6 million tonnes of carbon dioxide-equivalent emissions released into the air.

The garbage truck campaign comes as Hellmann’s prepares to launch a food waste reduction app called “Fridge Night” next month. The app is asking users to commit to one “use up day” per week in which they make a meal using only items in their fridge, and will provide tips and tricks to help users accomplish their objective.

“We know that if you take the program and complete it, as an individual household you will reduce your food waste by one-third,” says Kiroff.