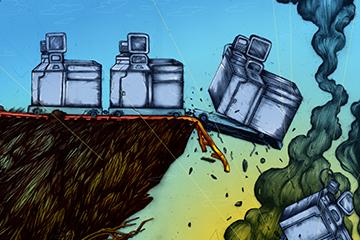 Want to get the straight talk on self-checkout machines?

Ask Pierre Desmanches, co-owner of an IGA near Montreal.

“I don’t like the system,” he says, shaking his head, as he did on a recent Saturday morning patrol of his aisles. “We lose the face-to-face with the customer. When Loblaw installed them , customers started coming here, complaining about them.”

Self-checkout machines (SCOs), now in service for about two decades, were supposed to be a win-win. They promised to reduce costs, improve efficiency and boost customer satisfaction. So, what happened?

Today, grocery stores still rely mostly on cashiers, and some chains have started removing self- checkouts. Last fall, American grocer Jewel-Osco took out some in order to ensure that its stores have “an opportunity for that last interaction” with customers, Jewel-Osco spokesperson Allison Sperling told a reporter.

In Canada, none of the major grocers appear to be adding machines. Loblaw has even removed some from newly renovated Provigo Le Marchés.

“We promise the best service possible, and the machines aren’t part of that,” a spokesperson for the chain told Canadian Grocer. “ hasn’t been a failure, but it hasn’t been a success.”

In a sparkling new Provigo Le Marché in Saint Sauveur, Que., manager Annie Lacerte says SCOs often jammed and were confusing to operate. Customers didn’t like hunting for produce codes, and the repetitive computer voice instruction to “please put the item in the bag, please put the item in the bag” got on nerves. The store recently removed its SCOs, replacing them with tills manned by humans.

A survey last fall by U.K. retail technology firm Tensator found one-third of Brits have walked out of a store over a bad experience with an SCO. Business Insider website recently reported that Costco was pulling SCO machines out of its stores. The club chain’s CEO, Craig Jelinek, concluded that cashiers were more efficient than the machines.

But don’t count out self-checkouts yet. Walmart is reportedly adding 10,000 machines, and another U.K. study suggests the market for self-checkouts will go up 15% over the next four years in the U.K. as retailers look for ways to economize.

“It’s the machine of the future,” he believes.

Grocery chains may also eventually rethink the value that cashiers bring to the customer experience. At some stores, clerks no longer bag groceries, while others barely make eye contact with shoppers.

Jordan LeBel, an associate professor of marketing at Concordia University’s John Molson School of Business, in Montreal, remembers standing at a supermarket cash register listening to the cashier explicitly describe her escapades from the night before to a bagger, ignoring LeBel completely.

“I’d rather interact with a machine than with a cashier that is not adding anything to my experience,” he says.

For now, grocers appear on the fence about self-checkouts. A survey of Loblaw, Metro and Sobeys by Canadian Grocer found none have plans to add machines or (those Provigos excepted) remove them.

“We continue to look at ways to better meet customer needs through self-checkouts,” says spokesperson Cynthia Thompson. “That includes reviewing new technologies and considering placement options in the front end.”

At Metro, four stores in Quebec and 14 in Ontario have SCOs. Asked about their effectiveness, Metro’s Geneviève Gregoire wrote in an email, “Our experience has demonstrated that this is not something that can live in all stores: It asks for space, for surveillance, supervision, and at the end, our customers don’t necessarily get a great shopping experience, so the benefits don’t justify the switch.”

Even SCOs’ cost-savings are debated. Desmanches, the IGA owner, doesn’t think they are cheaper than clerks. A new British study found one in five consumers admitted to stealing from them. The average: 15 pounds (CDN$27) a month.

But SCO technology is evolving rapidly. As machines become more sophisticated, self-checkout may experience a renaissance. Brian Yates, director of product marketing at Fujitsu, says newer machines can be programmed for total automation or to be used with cashiers.

At some Tescos, meanwhile, shoppers are now provided with wireless scanners. Customers scan each item as they drop it into the cart and pay the total on their way out. According to Tesco, many customers get a kick out of self-scanning.

It’s a thrill that apparently still eludes at many other self-checkout machines.