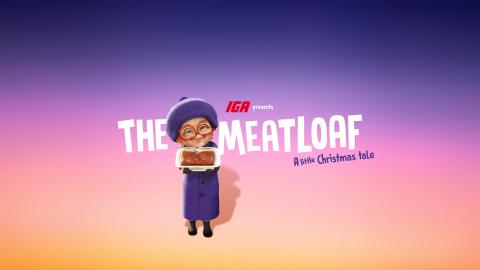 Nearly a decade ago, Huffpost ran a humorous editorial feature called “Meatloaf Fails,” a photo gallery of crimes against “moomanity” that could conceivably have been the inspiration for IGA’s latest holiday ad, “The Meatloaf.”

Introduced five years ago, the grocer’s animated holiday spot has become a firmly established tradition, telling a heart-warming story about love, friendship and family in which food is the common ingredient.

Previous spots in the annual campaign have featured children bonding over the contents of their lunchboxes, a girl making desserts for a young cancer patient, a boy learning to cook by leaving increasingly elaborate treats for Santa, and a young girl and her distant grandfather finding common ground over a shared love of food and hockey.

This year’s 90-second ad – once again created by Montreal agency Sid Lee – tells the story of Auntie Lulu, a beloved family figure known for her meatloaf, which she dutifully brings to every holiday gathering in a Corningware dish.

Unfortunately, it’s inedible, leading the family to resort to increasingly elaborate tactics to distract Auntie Lulu so they can feed it to the family dog. The ad features a bittersweet ending, with viewers learning that Lulu isn’t present at this year’s gathering. However, the family keeps her memory alive by purchasing the necessary ingredients at IGA and following her recipe to (im)perfectly recreate the meatloaf.

The spot is noteworthy not only for subtly acknowledging the death of a loved one, but also for showing food that is, well, bad. “As a grocer you want to only show food that’s good,” says IGA’s vice-president of marketing, Carl Pichette. “It’s counterintuitive, but I think it’s a good disruption.”

As for Lulu’s absence at the end of the spot, Pichette says it’s not the focus of the story and there was not much internal debate about even tacitly acknowledging death in a holiday ad campaign.

The concept presented to IGA produced goosebumps, he says, and there was a reluctance to tinker with the idea. “If you over-rationalize that kind of story, I think you can kill it easily,” he says. “For us, the impact that was created… was ‘Oh my god.’ Some people were crying, and for good reason.”

The Auntie Lulu character is also being featured in posters in Cineplex theatre locations in Quebec as well as IGA’s weekly flyer and in-store assets. The company is also planning a follow-up ad featuring Lulu that will debut after Christmas, although Pichette won’t say what it’s about.

Each story in IGA’s holiday ad campaign is told using animation, which Pichette calls “part of our DNA,” even spilling over into the banner’s non-holiday advertising. “I would say that 90% of our mass-media advertising uses a 3D animation approach,” says Bichette. “It’s the way we talk to our customers.”

The annual ad also has a pronounced impact on driving customer traffic to IGA during the key holiday period, boosting its scores over category norms in both notion of credibility (+10%) and intent to shop (+15%).

“Our vision at the beginning was to create anticipation among customers to expect something very touching and emotional during this very special period,” says Pichette. “After five years, I think we’ve achieved that. Never in my career did I think that customers would be waiting for us to [create] advertising. That’s a marketer’s dream.”

Watch the ad below: