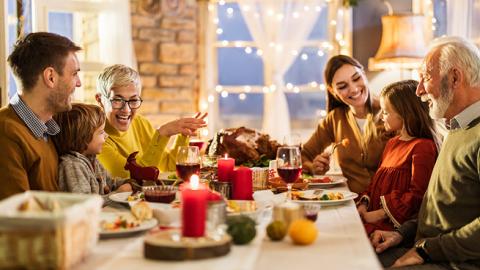 Over the last two years, holiday gatherings with family and friends have been cancelled or downsized dramatically in observance of COVID-19 protocols limiting the number of people allowed to gather under one roof. But as restrictions have been lifted, a sense of normalcy has returned and, even against the backdrop of elevated inflation, Canadians are ready (and willing) to celebrate.

According to Mintel’s Holiday Celebrations 2022 report, 73% of Canadians say they have missed a holiday celebration because of the pandemic. “To me, that indicates a lot of pent-up demand to go back to normal,” says Scott Stewart, associate director, lifestyles and retail at Mintel. “The 2020 holiday was personal sacrifice for the greater good. Last year, [attending or hosting a holiday gathering] was more of a personal risk. Even if the risk is the same this year as it was last year, there are a lot of people that would still say yes [to celebrating together].” Also, 50% of respondents say they are comfortable attending a big event. “If that many people are comfortable going to a place with 20,000 people, having Christmas with 15 is fine,” says Stewart. “Between the comfort level and that pent-up demand, we’re expecting a pretty big season relative to the past two years.”

Kathy Perrotta, vice-president of marketing strategy and understanding at Ipsos Canada, says attendance at holiday activities was at an all-time low in 2020. It increased slightly in 2021, but “this year we expect to see a rebound – probably not quite to pre-pandemic levels, but close, so definitely something retailers want to invest in.” She says Ipsos has already noticed long weekend celebrations growing “in size and complexity” and that these “special gatherings” are up 6% in 2022 compared to 2021, “an indication that we’re moving in the direction of reinstating the gatherings. There’s pent-up demand to reconnect.”

Still, Perrotta says the number of people gathering is lower than before the pandemic, with average parties of two to three people, rather than the typical four-plus. According to Perrotta, 30% of Canadians say the cost and workload are barriers to hosting large groups. “It’s incumbent on retailers to plan for those events and inspire consumers to entertain in a value-conscious way,” she says.

Undoubtedly, inflation will make the 2022 holiday season more expensive for Canadians. In July, Statistics Canada reported that food costs were up 9.9% compared with a year ago. Year over year, the price of canned and other prepared vegetables has risen 15.4%, butter is up 17.3%, and the cost of eggs has increased 15.8%.

Despite this, Mintel’s Stewart believes tradition and desire might prevail over financial concerns. “My hypothesis is because this is such a special time and people have waited so long for it, most will find a way to make it work. Inflation has been difficult, but for most Canadians it’s more a nuisance than a crisis.”

Mintel research conducted in June found that 58% of Canadians were price comparing and 38% would forfeit non-essentials. “So, before people give something up, they’ll put more effort into finding it, maybe go to two different stores to get the cranberry sauce they love,” says Stewart. “Discounts will probably resonate more than they normally would for a holiday season because people have their antenna up.”

From a messaging perspective, Stewart calls this “the best opportunity in two years to give people a break. Just as the pandemic is slowing, you’ve got inflation exploding. If I were running communications for a store the message would be, ‘Hey, Canada, let’s celebrate, let’s make this special, let’s take a day to be normal.’ The hope would be a response of: ‘I do have a tight budget, but I don’t want to skimp on this. I’ve been waiting three years and it’s finally here.’ I think there’s an audience for that.”

Ryan Baraniuk, director of marketing at Arla Foods, says inflation makes it critical for brands to showcase value. Consumers, he says, will be looking to buy what gets them the most bang for their buck. That means portioned cheeses and recipes that let people serve more for less.

“Consumers are hungry for [value],” says Baraniuk. “Although inflation might mean they’re a little more pressed for money, they’re still going to [entertain]. Brands that deliver a value-added message that people can still treat themselves will capitalize on that pent-up demand.”

Even though consumers might be cutting back, Nick Chirichella, director of domestic channel marketing at Canada Beef, encourages grocers not to abandon choice cuts. “No doubt, you’ve got to stick to your traditional favourites,” Chirichella says. “People who want tenderloin and prime ribs still want them.” Alongside those items, this fall and winter, retailers should consider offering traditional value cuts such as hip and chuck roasts, and make a point of merchandising them against the richer pieces. “It might encourage someone to try something different,” he says.

As Canadians return to the comforts of celebrating in groups, Mintel’s Stewart anticipates a reliance on traditional meals and comfort foods. In Mintel’s Holiday Celebrations report, 82% of Canadians say the holidays remind them of their childhood, and 46% say they make the dishes they grew up with. “Nostalgia plays a huge role in the holidays,” says Stewart. “For people who’ve wanted to celebrate for the last two years, their wish is making it how it was.”

Knowing it will resonate with consumers, grocers should celebrate that love for tradition, says Stewart. “It’s what people are feeling right now and they want it echoed back at them: let’s do the Christmas we haven’t done for two years.”

Jo-Ann McArthur, president of Nourish Food Marketing, a full-service food and beverage marketing agency in Toronto, agrees. She believes nostalgia will dominate this season as consumers rekindle family traditions. Associated with that is the continuation of cooking at home with elevated ingredients. Mary Graham, president of Toronto food retailer Fresh City, says home cooking is one of the pandemic’s sweetest impacts. “People have had time to think about cooking and get reacquainted with their kitchens,” she says. “Over the holiday they’ll be wanting to embrace traditions and will be making their turkeys and using cranberries and green beans, but because there’s a heightened interest in foodie-ism, they’ll do this with a food twist.”

Toronto’s Summerhill Market is preparing for celebrations both large and small this year. Pre-pandemic, the independent grocer was filling holiday meal orders to feed six and eight guests, but demand for these dipped in 2020 and 2021, says president and co-owner Brad McMullen. In response, Summerhill offered prepared meals for two and four people that customers could buy off the shelf. Though McMullen is expecting a return to preCOVID sizes for gatherings, Summerhill will offer holiday meals in a range of sizes. “We’re expecting it’ll go back to the way it was,” says McMullen. “But we’ve got to take our best guess and keep a close eye on things.”

To combat the notion that entertaining larger groups is too much work, Perrotta from Ipsos recommends that retailers convince consumers it’s not the slog they anticipate. “I want to walk in [as a customer] and see the retailer is doing the ideation for me,” she explains. “That they’re inspiring me to say this is a simple, cost-effective way to reconnect with my loved ones. It’s an opportunity for retailers to remind consumers of the emotional benefit of these behaviours, which outweigh the cost barriers.”

Right now, retailers face what Perrotta calls trigger and tensions. The trigger is to reconnect, to remember person-to-person connection and how awesome it is. The tensions are the cost, the work involved and the safety. “You have to dial up the trigger to overcome the tensions.” She suggests pre-made charcuterie boards, robust bakery goods and pairing sides with sauces. Retailers also have an opportunity with hard goods – things like napkins, candles and trays, anything they might tie together as inspiration for shoppers. “The consumer can arrive and say, ‘It’s all there for me to pick up and invite people over to celebrate and get together. And it’s not a lot of work.’”

To that end, Bishop-Spencer suggests grocers make recipes available to shoppers. “People have upped their game in the kitchen in the last two years and stores need to be [prepared].” The Chicken Farmers of Canada’s website has 800 recipes, but Bishop-Spencer says they’ve seen a surge in demand for more recipes from different cultures, with new flavours and textures.

Nourish’s McArthur recommends retailers start their holiday efforts “earlier than they ever have.” The path to purchase isn’t linear, she says. “People are going online, to social, into stores, so any way you can inspire [them], do. Show them examples and really think nostalgia, elevated comfort foods, because that’s what this is going to be about: family favourites with a twist.”