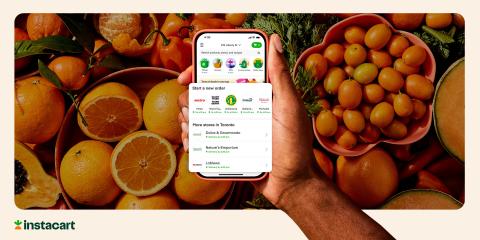 Grocery delivery startup Instacart is adding more Canadian stores to its app as it expands despite mounting competition, rising inflation and easing demand.

The San Francisco-based company said Tuesday it had partnered with more than 10 new companies in Canada including Metro Inc., GalleriaSupermarket and Giant Tiger, and local players such as Nature's Emporium and Super Natural Market. (Instacart already counts Costco, Loblaws and Walmart among its partners.)

"At Instacart, we're proud to deepen our presence across Canada and serve as a retail enablement platform for key retailers countrywide, from the largest grocers to small businesses and local favourites," said Chris Rogers, Instacart's VP of retail, in a press release.

"We'll continue to increase our footprint across Canada and create the best online grocery shopping experience possible for both our retail partners and customers," he continued.

Instacart became a major player in the grocery industry during the pandemic. Public health measures intended to curb the spread of COVID-19 accelerated the move to online grocery and powered Instacart's rapid growth.

While the meteoric growth of online grocery orders has slowed as restrictions ease, Instacart CEO Fidji Simo said the market was still ripe for further expansion.

"Online penetration for every other category of retail is about 30%," she said. "Grocery is still at 10% ... the growth potential is staring us in the face."

The company is now offering budget friendly alternatives to same-day delivery, including next-day delivery and pickup options, she said. "It's actually really important for us that grocery delivery isn't seen as a luxury."

The grocery delivery app allows customers to order groceries and other items from retail stores through its app. It then uses independent contractors, which it calls shoppers, to gather and deliver orders. The gig worker model has drawn criticism from labour advocates who have accused the company of inadequate pay rates and poor working conditions. 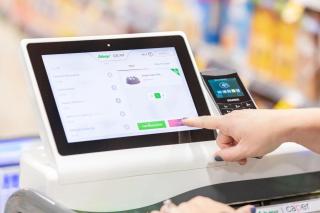 The company, which makes money by charging fees to customers and grocers, is also expanding the services it offers directly to retailers to help them improve both their in-store and online technology.

The Instacart Platform offers the technology the company developed for its own marketplace, including its ad platform, personalization and merchandising, and offers it directly to grocers to apply to their own online grocery services.

"Our goal is to grow retailers' businesses,'' Simo said, adding that Instacart's technology can propel the "digital transformation" of the legacy brick-and-mortar grocery stores.

One of the first transactions Simo announced after taking over as CEO of Instacart last summer was the acquisition of Caper AI, a smart cart and smart checkout technology company.

The artificial intelligence-powered shopping carts are already in use in some Sobeys grocery stores.

Meanwhile, Instacart is also growing into so-called grocery adjacent categories with the addition of a pet shop and sports nutrition store, as well as multiple smaller businesses.

"It really rounds out the selection," Simon said. "We want to have the largest selection possible available to Canadians."