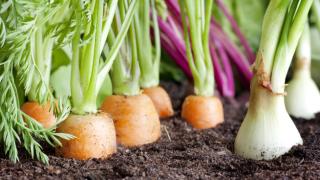 When it comes to decarbonization, the push back from the food industry has been that it’s super expensive. The assumption is that the industry can’t decouple GHG emissions from productivity without negatively impacting financial performance.

Its new research paper, Low Carbon Food Production: How farmers and food businesses can profit from decarbonizing the food industry, positions the adoption of low-carbon strategies as a viable commercial opportunity.

“Change is not easy, and can be seen as a threat, so people often take defensive postures,” says Martin Gooch, CEO of VCMI. “The paper is for those managers who want change – to show them this is how to do it, because as a society we have way exceeded the planet’s capacity to naturally renew resources.”

Globally, the food industry accounts for about one-third of human-caused greenhouse gas emissions, with 80% of the carbon footprint in the grocery sector coming from product suppliers – namely, farmers.

And so, decarbonization in the food sector starts with where crops grow because the more nutrient-rich the soil, the more carbon dioxide it can remove from the atmosphere and store in organic matter. Healthy soil also better retains moisture.

Farmers don’t have to make costly investments to achieve this, reports VCMI. It notes emission reductions realized from energy-efficient equipment are typically minor compared to the reductions achieved through the adoption of low-tech regenerative agricultural practices.

The Norfolk four-course system of crop rotation, for instance, has been scientifically proven for years to sustain healthy soils. However, many farms are focused on maximizing yield of one or two crops every year to the detriment of the soil, says Gooch.

If farmers could work together to foster collaborative rather than adversarial relationships, they could synchronize crop rotation. Other strategies include one farmer’s livestock grazing in another’s orchard to improve soil health.

The role of retailers

Grocers have limited scope to reduce the industry’s overall greenhouse gas emissions. While not enablers of change, they will be powerful drivers of change.

“Sustainability is a credence attribute, and busy consumers rely on directional signals [from retailers and food companies] when trying to do the right thing,” reads the report. “The verification on which these signals rest will rely on formal and expensive certification schemes or inexpensive trust-based assurances.”

Inexpensive measures include retailers working with food suppliers on eco-claims, including on their private label brand.

“The important thing for retailers is to establish a metric that they can share with the rest of the chain, including suppliers,” says Mooch. “They have to figure out how ambitious they can be about their improvements, assign science-based targets and determine how to achieve them.”

This summer, Sobey’s announced science-based targets in supporting Canada’s transition to a low-carbon economy. It includes working with its supplier base, so that 62% of them (based on spend) will have set science-based reduction targets on their direct (Scope 1) and indirect (Scope 2) emissions in five years.

“Sobey’s is a great example of how to set targets,” says Gooch