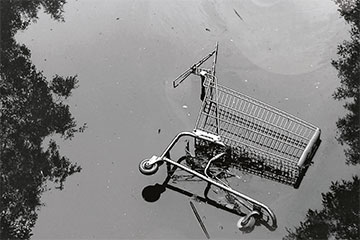 Foodland franchisee Chris Chapman has been in the grocery business a long time. So when he learned that the city of Woodstock, Ont. was considering ways of dealing with its abandoned shopping cart problem, the local grocer offered himself up as an expert on the subject.

“I want to clear up some misconceptions and possibly prevent another big expense for my business,” Chapman said at the hour-long presentation he made to city council in Canada’s self-proclaimed dairy capital last November.

Chapman was one of a handful of owners and managers from Woodstock’s 14 food stores who had responded to a survey sent by the city as part of an investigation into why it picks up more than 100 abandoned shopping carts on public property every year (59% of them from three unidentified stores, and 75% of them never reclaimed and sold for scrap). During his presentation, he listed the many challenges, realities and possible solutions to the problem. “I like to joke that shopping carts have a flaw in their design,” Chapman told council in the televised proceedings, which are available on the city’s website. “They only go in one direction—away.”

Jokes aside, abandoned shopping carts are no laughing matter for many grocers and municipalities.

Every year, thousands of shopping carts are removed from store parking lots across Canada, mostly by carless customers who live close by and need a way to bring their items home. Most are returned or retrieved by stores. Some are absconded by scrap-metal collectors, thrill-seeking teenagers who pile into the baskets for joy rides, homeless people who use them to carry their worldly possessions, or by people who use them in their homes and businesses to transport goods and materials—some even go on to serve as barbecues.

Many, however, end up abandoned. Both a visual blight for taxpayers and a hazard for pedestrians, drivers and city workers operating snow removal equipment, abandoned carts are driving many municipal governments to distraction. “This has been a lingering issue in my ward for many years,” said John Gazzola, a municipal politician in Kitchener, Ont. “Streets are often littered with abandoned shopping carts. It doesn’t look very friendly.”

In August, Gazzola introduced a motion calling on city staff to find a solution to the problem. It passed unanimously. And Kitchener and Woodstock are just the latest communities in Ontario trying to tackle the issue.

Over the past few years, at least three other Ontario cities—Guelph, Mississauga and Ottawa—have tried to legislate the problem out of existence by enacting bylaws that impose fines on retailers for abandoned shopping carts that are picked up and impounded by city employees.

The move angered retailers, however, who are tired of being pushed around on the shopping cart issue. “Shopping carts are expensive and are valuable property for retailers, whose customers rely on them for convenience,” said David Wilkes, senior vice-president at the Retail Council of Canada, which publicly opposed the Ottawa shopping cart bylaw. “Slapping retailers with fines when people walk off with their carts is like punishing people who have had their bike stolen,” said Wilkes. “It’s unfair and it makes no sense.” He encouraged Canadian municipalities to “work collaboratively with retailers rather than impose regulated solutions.”

Stores across North America have long had designated areas in their parking lots where driving customers can leave shopping carts. However, stores have also been known to permit—or at least tolerate—customers on foot who “borrow” their carts. Store owners are a bit more lenient for families with large orders, the elderly and the handicapped, letting them leave the lot and transport their groceries home in carts. “Even if they only have one bag of groceries, a shopping cart makes a world of difference (to an elderly person),” Chapman said. “And many people don’t have the $10 or $20 to lay out for a taxi.”

The problem is a big one for some stores, and it’s not new. According to 1999 data from the Food Marketing Institute in Washington, D.C., lost shopping carts cost businesses more than $800 million globally.

In Dartmouth, the Halifax-area town that is the setting for the Trailer Park Boys series and its star Bubbles, the myopic petty criminal who earns a living by fixing and reselling stolen shopping carts, stores have to pay an impounding fee of $50 to recover their abandoned carts (within 30 days—after that the carts are recycled).

In Vancouver, the city also rounds up abandoned carts that are in good condition. However, it stores them free of charge until they are picked up by stores or third-party contractors. “If the city picks up carts on public property that are broken or in poor condition, they are recycled,” wrote city of Vancouver spokesperson Jag Sandhu. He added that abandoned grocery carts “are not a serious issue for the city.”

A big reason for that may be that many grocers are using one of a variety of marketplace solutions or in-store remedies. Though none of Canada’s major retailers agreed to be interviewed on this issue, referring calls to the Retail Council of Canada, a few grocers who agreed to speak off the record said they mostly use local contractors to retrieve carts for a fee.

More high-tech solutions include electronic braking systems that lock wheels once carts leave parking lots and coin-operated locking devices that return a customer’s deposit when the cart is returned.

Chapman dissed those solutions, saying the wheel-lock system could cost upward of $40,000 for his 150 shopping carts, and that coin-lock systems “would cost me $30 to $50 per cart and they don’t stop the problem.” He said store owners of all stripes—corporate and independent grocers, as well as major retailers like Walmart, Giant Tiger and Shoppers Drug Mart—need to determine and use whatever high- or low-tech solutions they can afford to keep shopping carts off city streets.

“I’m out there every day in my pick-up truck, picking up buggies,” said Chapman. “I see it as part of my responsibilities as a good neighbour and a fiscally responsible businessman who can’t afford to lay out $180 every time a shopping cart goes missing.”