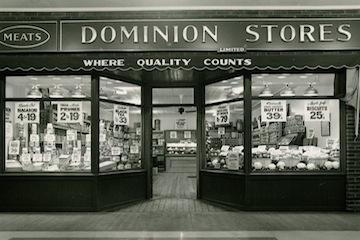 All of the speculative chatter among food industry analysts over the fate of Canada Safeway got me thinking about similar situations in the not-so-distant past.

In particular, I thought of Dominion Stores Limited, which was Canada’s No. 1 grocery chain from the 1950s through the early ’80s. Then, in 1985, it came to a quiet, albeit wrenching, end.

Today, it’s easy to forget what a force Dominion once was. The company was founded in 1919 in Toronto, and throughout its first 20 years, steadily added stores, including some that it picked up from T. P. Loblaw (yes, that Loblaw). In the 1930s, Dominion boasted some 572 stores, although most of these were small shops.

Dominion, like so many other companies, suffered through the Great Depression. But in 1939, a new president, J. William Horsey, began to modernize the chain.

It was Horsey who made sure the company remained in Canadian hands (Dominion’s founders were Americans) when he worked with financier Bud McDougald to make Dominion part of E. P. Taylor’s newly formed Argus Corporation.

Horsey also increased wages and gave employees benefits, such as paid vacations. As the smaller, older stores closed and were replaced with larger, modern supermarkets, Dominion reduced its store number to 195 by 1945. But sales continued to soar, and Dominion solidified its position as the largest grocery chain in Canada.

Dominion thrived during the economic boom that followed the Second World War. New locations were opened with great fanfare. One launch featured a string quartet, and many guests arrived by limousine. Each female customer received an orchid in a miniature container.

Then, in the 1950s, Dominion’s advertising director, J. Scott Feggans, came up with a jingle that ended in “It’s mainly because of the meat!” It became such an iconic slogan that many people still remember it today.

These were the glory years of Dominion. But its demise was near at hand, and Dominion’s fall would become a lengthy affair. In the 1970s, inflation and discounting wars with rivals ravaged Dominion’s bottom line.

By the 1980s, store upkeep was failing earnings plunged, and relations with suppliers became strained as Dominion buyers began asking for listing allowances.

Pieces of the company were sold off amid a seemingly endless series of corporate reorganizations at Argus, then under the watch of Conrad Black. Meanwhile, rivals such as Loblaw, which was rebuilding itself after near bankruptcy, took advantage of the confusion. Loblaw started to build modern stores that lured away younger shoppers from Dominion.

Dominion’s head office at the time was on Rogers Road in Toronto. I was invited there on several occasions, and recall meeting a string of presidents in a short period: Tom Bolton, John Toma and Allen Jackson. For some reason, I also remember Montegue Black, Conrad’s brother, taking me on a tour of a new Dominion store in west Toronto.

One of the interesting features of Dominion’s head office was in the basement. It was a completely restored 1920s grocery store with all the old product in original labels, wooded floors, ice chests, wooden counters, old cash register and slicers. It was wonderful.

Dominion at that time also had a propensity for building new stores in empty fields in anticipation of future growth and to keep out competitors. Perhaps it wasn’t the wisest strategy.

And that brings me back to my opening paragraph about Canada Safeway.

Like Safeway today, Dominion was certainly not for sale in 1985. But when the American grocery giant A&P backed a truckload of money up to Dominion’s doors, it became a deal too hard to refuse. A&P acquired the head office, distribution centre, and most of the Ontario stores.

Canada Safeway is clearly a lot healthier than Dominion was. It also boasts the best locations in Western Canada.

But as rumours swirl about its potential sale, you can bet Loblaw, Sobeys and Metro have all prepared their truckloads of money to make bids. Metro would have the most to gain. But Loblaw and Sobeys can likely mount greater sums of money.

We eagerly await any news.