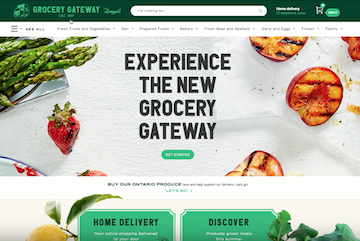 Longo’s is expanding its Grocery Gateway business, with president and CEO Anthony Longo saying that the online grocery industry has officially “come of age” in the Toronto region.

Longo says that Grocery Gateway has seen a double-digit increase in shoppers since re-launching its website in June, while order sizes have been “rapidly increasing” over the past two years.

According to Longo, the average order on Grocery Gateway is now over $150. While he won’t disclose what percentage of Longo’s total sales Grocery Gateway represents, he describes it as the fastest-growing part of the company’s business.

“As consumers get more comfortable with online shopping and gain more confidence and trust in the product assortment and quality, they will typically move on to more categories when they shop,” says Longo, telling Canadian Grocer he is “very bullish” on the online grocery space.

Longo’s has spent approximately $8-million to triple the size of Grocery Gateway’s Rexdale-based facility to 150,000 square feet, enabling it to keep up with increased consumer demand.

That follows an approximately $2.5-million investment in a new Grocery Gateway website that includes new features such as themed grocery lists and the ability to add regular items to personal shopping lists.

Longo’s has also expanded Grocery Gateway’s product assortment from 10,000 to approximately 16,000 items, with a particular emphasis on frozen foods. Longo says that number of frozen products will expand from approximately 900 SKUs currently to roughly 2,000 in the coming months.

“Grocery Gateway consumers have been telling us that we don’t have enough depth in frozen, so we’re going to meet that need,” says Longo, adding that the company also plans to bolster its organics section.

Longo’s has also added new delivery vehicles to its fleet, bringing it to approximately 47 vehicles. The company is also testing hybrid vehicles, says Longo. In addition, the company has increased Grocery Gateway’s staff to about 375 people, including shoppers, drivers, etc.

The expansion comes as Grocery Gateway faces increased competition from online upstarts such as Urbery and InstaBuggy, while traditional rivals such as Walmart and Loblaws have also introduced and expanded their “click and collect” offering.

“We’re the only doing direct to home delivery with a full assortment of fresh, frozen and ambient products, so I think we’re very well-positioned in this marketplace,” says Longo.

According to a November 2015 report from Mintel, only 9% of 1,728 Canadian internet users said they had shopped online for groceries in the previous six months – well behind categories such as clothing or footwear (43%), electronics or appliances (39%) or books/e-books (37%).

Grocery is one of the last major shopping categories to attract widespread customer adoption, with Mintel saying that one of its biggest hurdles is an inability to inspect and select fresh foods such as fruit and meat.

“Consumers generally say they do want to choose their own produce, so have to build trust with them,” says Longo, who says that Grocery Gateway also offers a money-back guarantee for those customers who are not satisfied with their order. “Once they see that the product they’re receiving is of great quality, then they’ll go deeper in the category.”

Grocery Gateway was launched in 1999, and was acquired by Longo’s in 2004 after going into receivership.