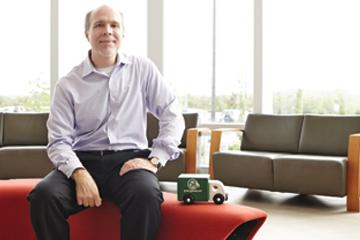 The company launched in 1999, at the height of the dot-com boom. But like many other Internet companies, Grocery Gateway struggled early on. Unable to generate enough order volume, it filed for receivership, in August 2004. Then along came Longo’s. The independent grocer bought the company later that year, ushering in a decade of steady growth.

Today, despite its relatively steep delivery fee ($11.95 per residential order), Grocery Gateway is a hit in Toronto, where it operates. Tallevi, meanwhile, is the only Grocery Gateway co-founder still with the company.

Canadian Grocer's assistant editor, Paige Ellis, recently spoke with Tallevi about his business and the potential for grocery sales online.

Who are Grocery Gateway's primary customers?

Thanks to the condo boom in Toronto, a growing segment of our customers are young, time-starved professionals, many of whom don’t own a car. We also have a large percentage of families. The parents are balancing work and family life. And then we have the “in and out” group; these customers see a need for the service at points in their life, like when they’re ill, have a newborn or have a broken foot.

What are some of the main challenges for e-grocery?

This is a tough business because you have low margins, retailers are fiercely competitive on pricing and you have the complicated logistics around delivery. To be profitable, you have to have large baskets, which is what’s happening with us today.

Another issue is consumer expectation. The e-commerce world developed based on better pricing. For example, someone walks into a bookstore, looks at the price of a book, pulls out a phone and orders it online because it’s 40% cheaper. That expectation of cheap prices and cheap delivery permeates across the e-commerce field. The question then becomes: How do you drive value outside of price?

You’ve changed your “pick model” a few times. Why?

When we first started, we invested in a very large, fully automated fulfilment centre. But we could never achieve the volumes required to make the operation profitable. Once Longo’s acquired us, we sold the fulfilment centre and started picking from Longo’s stores. We had far fewer costs, and it was much easier to hit profitability.

But then, as we grew, certain constraints came into play. Inventory, for example, is a challenge. You don’t know when a daytime customer will walk in a store and wipe you out of a product. Also, there are no economies of scale as you pick from more and more stores.

Last year, it became economical for us to build a “dedicated pick store.” Ours is 50,000 square feet, based on a similar concept to Tesco’s “dark stores” in the U.K. We felt we had the volume to justify the investment. And those projections are being met.

What other online grocery models do you look at?

Everyone looks to the U.K., because it’s a hot market. But there are also unique things happening there that aren’t happening here. First, they have an extremely dense population. Also, high gas prices and road tolls mean consumers are not as willing to drive to stores.

We also look to Amazon and Walmart, who are experimenting with e-grocery. The key is to understand why those companies are entering the business. For Amazon, the grocery division might not have to be profitable. It might be about building a direct channel to the consumer. But as a standalone grocery delivery company, the business has to be profitable.

What are the next steps you are taking?

Mobile was the next big step for us. That’s why we launched our mobile app, in 2012. Same-day delivery would be a big win. The issues we’re focused on today are operational.

Where will e-grocery in Canada be in 10 years?

If you’d asked me the same question 10 years ago, I’d be drastically off. That being said, we should pay attention to this ongoing mention of “the tipping point.” If that comes, you’ll see double-digit growth. If the tipping point doesn’t arrive, online grocery will grow, but the number of people that the industry can support will be limited.