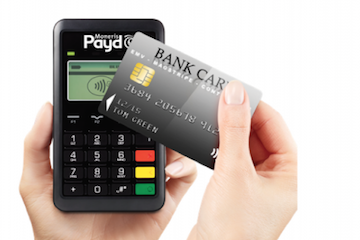 Canada’s largest payments processing provider has launched a mobile payments app that it says can fully replace conventional registers used by both small and large businesses. The launch should put Moneris on the radar of newer tech companies like Square and PayPal that are jockeying to own the fledgling mobile point-of-sale space. The new app, Payd Pro Plus, features sales and inventory management tools, customer information profiles, and the ability to connect with third-party hardware like barcode scanners, receipt printers and cash drawers. Rob Cameron, Moneris chief product and marketing officer, said while the company’s previous mobile products have been targeted specifically at processing credit and debit payments, the new app is intended to be a full point-of-sale system for brick-and-mortar retailers. READ: Moneris brings next generation of mobile payment to Canada “The beauty of using something like an iPad is the conventions are familiar,” he said. “You can use the camera to take a picture of an inventory item. All that stuff is just so much simpler now in the world of tablets, so we’ve really tried to pivot and take advantage of the ease-of-use of tablets.” Moneris is certainly not the first company to offer a retail register app, but it does have a few cards to play that less established companies don’t. Thanks to its long legacy with conventional payments, Payd Pro Plus is set up to accept debit, something that few U.S. startups have focused on so far. Square, for instance, is not yet able to accept debit cards in Canada.

Since Moneris’ business is primarily in Canada, it adapts its solutions first for Canadian retailers and consumers, said Cameron, which means debit has to be a priority. “In Canada consumers love their debit cards. Half of transactions are on debit cards. So we wouldn’t deploy an in-store solution without supporting debit,” he said. Payd is compatible with chip and PIN cards, contactless payments, Apple Pay and other mobile wallets and wearables. Cameron added that Moneris’ technical support for clients is a lot more comprehensive than most mobile tech companies offer, with 24-hour call centres and on-site installation. For a lot of small Canadian businesses, especially those focused on events or temporary retail spaces, that’s a make-or-break part of the deal, he said. “When you’re trying to set up and you’re under a crunch, it’s hard, so we think it’s going to be a real winner to send someone out. The small guy wants to focus on sales, not on trying to learn how to get devices paired and all those things.” One such small business is the Revolver Gallery, an L.A.-based art curation business that launched an Andy Warhol exhibition in downtown Toronto on Canaday Day. Revolver is using Payd Pro Plus to accept ticket and gift shop payments via iPad. READ: How Mastercard plans to win the mobile wallet wars “We needed a payment solution that would get guests through lines quickly and efficiently, but also fit the design of our space,” said Ron Rivlin, a Toronto native who founded Revolver, in a press statement. He said the on-site installation and support really helped his team launch the gallery on a short schedule. Moneris’ extra level of service comes at a slightly higher premium than a lean, freemium small-business app, however. A Payd Pro Plus subscription starts at $19.95 per month plus a flat 2.65% fee on credit transactions, and scales up to $100 per month for greater inventory volumes and multiple registers. (Debit transactions have no charge, though, another big plus for Canadian merchants.) Cameron said for Payd Pro Plus, Moneris is focused mostly on independent retail stores and small chains that are looking for a stable solution, with reliable support they could potentially scale. Payd isn’t just for small businesses, either. He said Moneris’ larger retail accounts have used its mobile solutions for pop-up stores and events. In fact, 40% of Moneris’ new customers are making use of its mobile solutions. “I think you’ll see half of retailers in the next few years have tablets versus these complicated PC environments,” he said. “Not just from us, but we’re going to make an easy one, and a good one.” This article first appeared on MarketingMag.ca
Advertisement
Advertisement