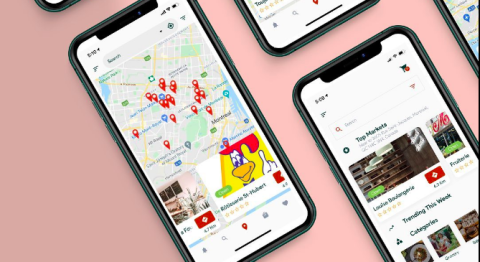 Sauvegarde offers customers discounts on food from restaurants and grocers

A Montreal man has launched a service that joins a growing list of apps aimed at curbing food waste in Canada. Sauvegarde launched last week for both Android and iOS, with founder John Saliby saying that downloads already number “in the thousands.”

Like other food waste apps including Flashfood and Too Good to Go, Sauvegarde offers customers discounts on food from restaurants and grocers that might not sell and otherwise end up in landfill.

Saliby says his product is distinguished from the other food waste apps by the fact it has also established relationships with food distributors in addition to the usual partners such as grocery stores, bakeries, and restaurants.

According to Sauvegarde, nearly one-third of all food waste in Canada—an amount that food rescue organization Second Harvest has pegged at 35.5 million tonnes per year—occurs at the retail and distribution level.

Saliby calls the numbers around food waste “super alarming,” and says he wanted to develop a solution that could divert at least a portion of the food from landfill. “It’s been going overwhelmingly well,” he says.

In development for the past year, Sauvegarde currently has about 30 partners in the Montreal area. They include the food distributors Groupe Alimentaire Miron, a leading importer and distributor of Greek variety foods, and Cucina Fine Foods, which distributes European gourmet foods, primarily from Italy. Both distributors have entrances where Sauvegarde users can go to pick up products, says Saliby.

Users can shop for individual products within the Sauvegarde app, while partners also offer what Saliby describes as “surprise bags” of items from grocery and bakery partners. Grocery partner Fruiterie Milano, for example, is currently offering $30 worth of mixed produce—which might be misshapen and unappealing to store shoppers—for $20.

The organization has also aligned its objectives with those of the City of Montreal, which has committed to reducing food waste by 50% by 2025 and achieving zero waste by 2030.

Saliby says there’s no sense of competition with rival food waste apps, even noting the eventual arrival of a new product called Foody Saviour. “We don’t see them as competitors,” he says. “Our objective is to eliminate food waste, which is a big problem. The more there are, the more we can make a difference.”

Saliby continues to add functionality to the app, including a feature that enables users to identify preferred merchants and receive notifications when new products are available for purchase.

Saliby comes to Sauvegarde from finance, having worked with companies including Air Canada and GE Capital. He says he was taught to never waste food while growing up, something that stuck with him into adulthood.

“My whole life I wanted to create something that would catapult the world into a better place,” he says.