Online grocery service Inabuggy Inc. (which recently changed the name of its customer-facing service to Buggy) is growing with the acquisition of ultra-fast delivery service Ninja Delivery. Terms were not disclosed.

Established in 2021, Ninja had operations in its home market of Waterloo and Toronto, promising customers delivery of grocery staples within as little as 10 minutes. It used so-called “dark stores,” essentially mini warehouses, to house products, with e-bike riding “Delivery Ninjas” delivering to customers within a five-kilometre radius.

But, Ninja abruptly stopped taking orders in May, just two months after announcing it had received $2.8 million in funding to grow the business. In an email to Canadian Grocer at the time, co-founder and CEO Wesley Yue said, “we’re making some changes to our stores so have paused our service in the meantime,” adding that the company would have news to share soon.

According to Buggy CEO Nicole Verkindt, the company has acquired all of Ninja’s assets, and will now be offering its fast-delivery services under the Buggy name through a revamped and rebranded app.

Buggy will not reopen Ninja’s previous dark stores, but is instead opening a new 1,700-square-foot location housing 2,500 SKUs in Toronto’s Leslieville neighbourhood early next month, with plans for additional stores in August and September.

The stores house items from categories including bakery; fruits and vegetables; dairy; health and pharma; baby products and cleaning products. “We have all the core items that people expect from a grocery store, but we’re spending a lot of time with craft brands,” says Verkindt.

Verkindt says Buggy plans to open “many more” stores across the country after recently closing a $4.6 million funding round. “We’re just adding a lot of firepower overall to the company and to growth, and we’re making [the Ninja] acquisition just one piece of that wider strategy,” she says. 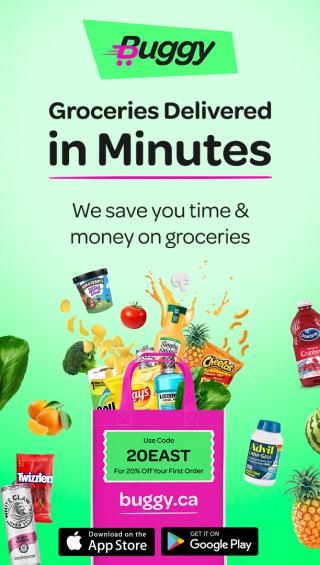 Buggy started in 2014 with a business built around drivers who fulfilled customer orders by shopping at brick-and-mortar grocery stores. However, the company is increasingly turning its attention to what Verkindt describes as the “instant needs business.”

“We’ve all got very addicted to Amazon and next-day delivery, but think about the number of things on Amazon where [customers] are like ‘Next day’s great, but it would be so nice if I can have that in 30 minutes.’”

Fast delivery has gained a significant foothold in Europe and the U.S. in recent years, with companies Fridge No More, Gitir, Gopuff, Gorillas and Jokr all vying for a share of the market.

“It’s completely exploded pretty much everywhere except for Canada, but it’s coming,” says Verkindt, who took over as Buggy’s chief executive earlier this year following the death of the company’s founder and CEO Julian Gleizer last year.

Verkindt says she initially had some misgivings about the quick grocery model, but became convinced of its viability after visiting dark stores in London and seeing how it had been adopted in smaller, more rural markets.

“A lot of the press has been focusing on cities like New York because it became very competitive very quickly and [services in those markets] were committing to really crazy delivery times, like under 10 minutes,” she says. “I think the big part of this story is how prevalent it is in middle America. It’s really quite common and used quite a lot.”

She sees rapid delivery accounting for “the majority” of Buggy’s future growth. “I’m really confident that it’s a way better service for customers,” she says, noting that the dark store approach gives the company full control over its inventory.

“That’s why I believe rapid delivery service is going to be the future of the company,” says Verkindt. “At every second of every day, we know exactly what we have in inventory in each store, so no customer is ever going to go on the app and see an Envy Apple unavailable.”

Encountering out-of-stock message or substitutions is the leading cause of frustration for online grocery shoppers, says Verkindt. “In the traditional model you stick the Envy Apples in your cart, you’re excited about it, and then the shopper gets to the store and realizes there are only Granny Smith and they put them in your bag. It’s a big hole in the traditional model.”

The goal, says Verkindt, is to grow the Buggy business thoughtfully and with a keen focus on customer service. “You really want to take your time with these customers, make sure you deliver exactly what they expect at the exact time you say,” she says. “You really want them to make it a habit.”