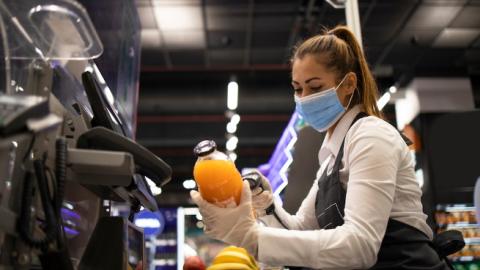 The recent surge in COVID-19 cases because of the Omicron variant has led to growing calls for Canadian grocers to reinstate the so-called “hero pay” they introduced during the pandemic’s early days.

Prominent figures including Windsor West MP Brian Masse, who is the federal NDP critic for economic development, as well as Unifor national president Jerry Dias have called for the return of the temporary pay raise for grocery employees.

Masse recently called supermarket workers “unrecognized heroes” who deserve “hazard pay” for their role in keeping stores open, and said he was committed to holding Empire Company Limited president and CEO Michael Medline to a promise made before a Commons committee in July 2020 to bring back hero pay if public health restrictions were reinstated.

In the summer of 2020, the committee held hearings into the decision by the country’s major grocery chains to simultaneously end hero pay in June of that year.

At the time, Medline committed to reinstating hero pay if COVID restrictions were reintroduced, which he did months later in Manitoba, Toronto and Peel Region in Ontario as rising cases of the virus in those areas prompted the shutdown of non-essential businesses. Since the start of the pandemic, Empire has given out more than $110 million in hero pay and bonuses to frontline employees.

Metro and Loblaw have also reintroduced bonus pay or other incentives at various points throughout the pandemic.

Toronto retail analyst Bruce Winder said grocers might be reluctant to offer their employees hero pay again because of the optics of pulling it away when things return to normal. However, he said it was warranted because of the huge spikes in COVID-19 cases caused by the highly transmittable Omicron variant.

“Grocery workers are very much putting themselves on the front line, and one could argue even more so now because the Omicron variant is so much more contagious,” said Winder.

But, Sylvain Charlebois, a professor in food distribution and food policy at Dalhousie University, said critics must realize that grocers are already operating with notoriously thin profit margins, with salaries accounting for more than one-third of their costs.

“You can’t just raise salaries by $2 an hour and expect grocery stores to remain profitable—it’s not as simple as that,” he said. “If you want to pay people more, great—I think we should consider that option. But at the same time, I’m not sure a grocery store needs to operate with the same number of people [currently working in them]. I think it’s unfair to ask grocers to raise wages just like that. It’s a much more complicated, multi-faceted issue than people think it is.”

Charlebois said there needed to be a “moral compromise” between grocers and the public to ensure that people are making a reasonable wage, while at the same time allowing grocers to implement cost-saving measures that are less staff intensive, such as self-serve checkouts.

“I hope that grocers can make the industry more attractive and make recruitment easier, but at the same time we also need to be realistic, and I’m not sure that the hero pay approach is sustainable,” he said. “When you’re looking at a 1% to 2% profit margin, it doesn’t take long before your profitability is compromised.”

But the conversation is being dominated by another surge in COVID cases that is once again disproportionately impacting workers in the retail sector.

According to the Retail Council of Canada, some of its members are reporting employee absenteeism of up to 20% because of the Omicron variant. The RCC said impacts to retailers are varied, including being forced to close stores for up to 48 hours in order to clean and restaff.

Neither Loblaw Companies Ltd. or Metro Inc. responded to interview requests, but in a statement provided to Canadian Grocer, Jacquelin Weatherbee, vice-president of communications and corporate affairs at Sobeys Inc. said: "As our president and CEO promised in July 2020…should we find ourselves in government-mandated lockdowns that close all non-essential retail, we will reinstate our lockdown bonus—as we have done every single time since that promise was made."

The possible reinstatement of hero pay could also earn some goodwill among the investor community, said Winder. “Companies don’t want to give away any money—they want to drive as much return to shareholders,” he said. “But even investors now are starting to look at what they call the triple bottom line, which is people, planet and profits. This would be an opportunity to build some good corporate social responsibility standing.”