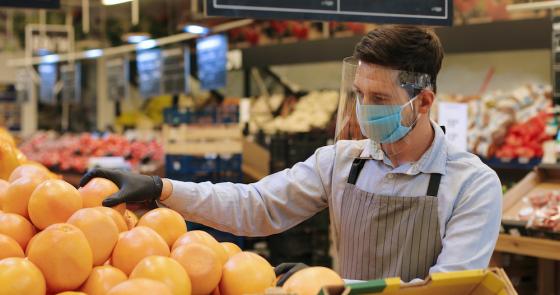 The surge in Omicron cases has some grocers feeling like it’s March 2020 all over again. Employee absences are on the rise as people call in sick, have to isolate, or take leaves of absence in what’s now the fourth wave of the pandemic.

According to the Retail Council of Canada (RCC), employee absenteeism across the retail sector is up to 20% due to the Omicron variant. The organization says the number could be higher as some employees isolate out of caution if they have been exposed to a friend or family with COVID symptoms. “[Among the impacts], the lack of available testing is creating issues for many retailers because staff with cold symptoms can’t confirm whether or not they have COVID,” notes national spokesperson Michelle Wasylyshen.

Giancarlo Trimarchi, president of Vince’s Market, says employee absenteeism at his company is currently around the 12% to 13% mark. “The situation is rapidly changing, so things might be different in a week or two,” he says. “However, we seem to be in a routine where each day brings new situations where team members have to isolate due to close contact or are off themselves because they tested positive.”

Another reason for the absences is people who feel that attending work would put them in danger of contracting COVID—and it’s a risk they don’t want to take. “Early on in the pandemic, most of our absences were because people were electing to stay home because they didn’t know how safe it was to be at work, or they lived with high-risk individuals,” says Trimarchi. “A lot of people returned, but since this latest wave came, we’ve seen a number of people elect to go on unpaid leave. Unplanned labour shortages are 100% back to being topical again.”

To mitigate the shortages, Vince’s Market tries to move employees around to different departments if someone calls in sick, or close departments early. “In the past, our approach would have been to keep that department open no matter what, even if you’ve got to put someone from a non-service department just to cover,” says Trimarchi. “Now, I think we have the benefit of being in unfamiliar times and [our customers] are more understanding and accepting.”

Toronto’s Summerhill Market made it through to Christmas with just a couple of cases among a staff of 325. “It felt like a miracle that we made it to Christmas without Omicron hitting us, but within a week, we had about 35 employees get it [outside of the workplace] or call in sick,” says Brad McMullen, president and co-owner of Summerhill Market. “At that point, we were just bracing for impact, but it felt like the first wave.” Now, he says the situation is fluid, with a rolling number of around 15 cases company-wide.

Summerhill Market hasn’t had to close any departments, but McMullen says the company has limited its prepared foods offering to cope with the worker absences. “That’s usually the first thing to go, but we have such a wide selection that it’s easy for us to [temporarily] cut certain items.”

He adds that Summerhill Market is lucky in the sense that its stores are very busy for Christmas and generally quieter in January. “So, the reduced staffing levels are not having a huge impact on our operations,” says McMullen. “We just retreat our service levels and go to a bare-bones type operation where we put food on the shelf and don’t try to create fancy displays or put on any promotions. It’s just getting the essentials and basics on the shelf and focusing on keeping everyone safe and healthy.”

Teresa Spinelli, president of Italian Centre Shop, says there are currently three to four people away at each of the retailer’s five stores in Alberta. “We have some shortages, but we have over 600 employees, so we’re able to move people around,” says Spinelli. “Throughout COVID, we did not lay anybody off—we kept everybody working and we repurposed people. So, even though our café and restaurants were closed, we moved people around, which was good for them and good for us.”

If worker absenteeism continues to rise, Spinelli says she might consider closing stores early. “However, we wouldn’t want to do that for several reasons—one of course, being fewer sales. But most importantly, people who are working are counting on those hours and it’s not their fault [if we have to close early].”

As Omicron rates continue to soar, retailers aren’t just worried about staffing issues in stores. “Retailers are concerned with the rippling effect throughout the supply chain, especially in transportation, as both are compounding the problem of labour shortages,” says RCC’s Wasylyshen. “Some retailers are starting to see inbound shipments to their distribution centre slowed due to drivers from vendors being off sick.”

Retailers are also concerned about the vaccine mandate for truck drivers entering from the United States, which takes effect on Jan. 15 and could lead to empty shelves and higher prices on essential goods.