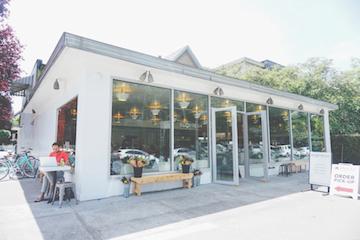 Making the move to bricks and mortar from online grocery was a question of logistics and technology, says Peter van Stolk, CEO of online grocery service Spud.

But van Stolk isn’t one to shy away from a challenge. The entrepreneur, who began his career by turning a juice bar into specialty soft drink company Jones Soda, aims to approach daunting challenges in unconventional ways.

His new store, branded “Be Fresh Local Market” opened in Kitsilano near downtown Vancouver a little more than three months ago. He has four other bricks-and-mortar stores—two in Calgary and two in Vancouver—that he calls market cafés.

The Canadian stores range between 1,000 and 1,500 sq. ft. The miniscule size is a plus, van Stolk says, with benefits including a small footprint, low rent, and no parking lot to pay for in an overheated real estate market. Customers are expected to have a coffee, socialize, and do a little shopping.

The latest Kitsilano locale is aimed at walkers and cyclists. “People come and sit and enjoy and shop,” he says. “It’s kind of like a community centre.”

Spud's online supermarket business is growing–van Stolk has said the business has doubled in the past three years. To help expand, Spud's website is being redesigned promising a “different feel, different user experience.” The new site has photos of all the offerings, from complete meals to snacks. It’s expected to go live Sept. 15.

Spud.ca promises same-day delivery in most cities if orders are placed before 11 a.m. In Vancouver, delivery is free for orders over $35, and purchases often come by bike or electric bike.

Van Stolk says he's an advocate of on-demand delivery and smaller inventories which means, he says, while the big chains might have more than 100 SKUs of produce, he’ll have half that stored in his warehouse. He says Spud will see new product turnover every 12.4 days, but 80% of items are in and out within 48 hours.

“At the end of the day I have lower waste, and fresher produce,” he says.