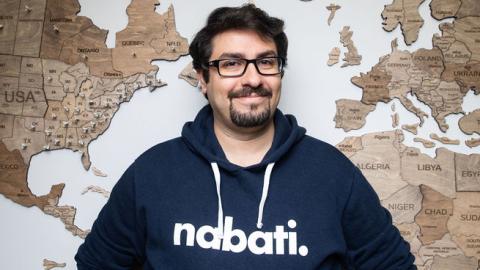 In 2013, Ahmad Yehya and his wife, Afaf Miri, began adopting a vegan lifestyle. They went on the hunt for healthy, plant-based snacks at local supermarkets in Edmonton, but were disappointed with what they found. “A lot of it had too much refined sugar,” Yehya recalls. Ingredient lists were long, with unpronounceable items. Gluten was another common ingredient in the few snack offerings they came across, and the couple was avoiding gluten due to health issues. So they retreated to their kitchen and experimented with vegan recipes using simple ingredients. At the time, it was a fun project for the couple while they continued their day jobs: Yehya as an engineer at a biomedical company and Miri as a business administrator.

“Plant-based foods are really not new to us in our culture,” says Yehya, who hails from Egypt (Miri is from Algeria). There, nuts and fruit, especially dates, are commonly used in desserts. They focused on developing a cheesecake first, since Yehya and Miri love desserts. “The breakthrough was really about process rather than ingredients,” explains Yehya. “How do you take fruits and nuts, like cashews and dates, and make something that is really creamy and rich?” After months of experimenting, Miri developed a winning cheesecake recipe with less than 10 ingredients.

In early 2014, they began selling their cheesecake in farmers markets and received rave reviews from customers. A few months after that, Miri quit her job to commit to the new business, and she began approaching cafés to stock and sell their cheesecakes. Orders grew from there and the couple moved the operation into a production kitchen. They named the growing business Nabati Foods—‘nabati’ meaning plant-based in Arabic.

The first few years were focused on increasing foodservice orders and getting their slices of cake onto more café and restaurant menus in Edmonton and Calgary. By 2016, Yehya had quit his engineering job to go all-in, becoming president (and later CEO) of the company.

In 2018 came the next big win— developing a retail version of the cheesecakes and getting them stocked in Safeway and Sobeys stores in Alberta. Shortly after that, they began selling in grocery stores out of province, via Save-On-Foods locations in British Columbia and Saskatchewan (in addition to Save-On-Foods in Alberta). Today, Nabati products are also found in Sobeys in Quebec, Whole Foods Market in British Columbia and Ontario, Metro in Ontario and more than 100 stores (mostly independent health food retailers) across the United States. Yehya recalls the first time he saw Nabati products on grocery store shelves. “It felt awesome,” he says.

After their cheesecake success, the couple moved quickly to expand product offerings, developing plant-based cheeses in 2019. “The focus was making it a cheese alternative that mimics dairy cheese in every aspect: the taste, texture, the retail pack,” recalls Yehya. After four months of testing, Nabati launched its mozzarella and cheddar cheese-style shreds. Next up was plant-based meat alternatives such as burgers (including f ’sh burgers and chick’n burgers), chick’n nuggets and strips, and “grounds” (a plant-based version of ground beef ).

Yehya was just gearing up to start selling Nabati products in far-flung locations like Hong Kong, along with targeting foodservice buyers in the United States, when COVID hit. But that didn’t slow the company’s progress. Instead, it pivoted from foodservice to an e-commerce website where customers could purchase products directly. The company also started working on its next big product launch—plant-based liquid eggs. It was a particularly difficult challenge for Yehya, who hired a special research and development food scientist just to tackle it. “[Eggs] were the most difficult, because we wanted something to go from liquid to solid on heat,” he explains. “It’s very hard to find the right ingredients and combinations that would react together.” They finally cracked the code with the use of a bean called lupin, which is traditionally pickled and eaten as a snack in Mediterranean cuisines. Combined with pea protein, Nabati finally had the right base for its liquid Plant Eggz, which launched on its e-commerce website in late August. Shortly after, in September 2021, Plant Eggz debuted on Sobeys shelves in Quebec and at Whole Foods across British Columbia and Ontario.

For the past three years, Yehya has been pulling 18-hour days, including most weekends, to grow the business. But for him, it’s all worth it. “We’re creating products that help people transition away from animal-based protein to a more sustainable lifestyle,” he says. “It’s important that we leave something for future generations and fix what we have right now.”