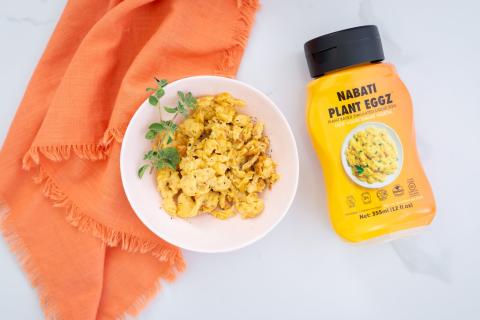 You can scramble them, make French toast with them, or fold them into an omelette.

You can even bake with Nabati Plant Eggz, as the vegan liquid "egg" product behaves similarly to conventional eggs in muffin, cookie and cake batter.

And when it comes to taste, Nabati Foods CEO Ahmad Yehya said the product—made with pea protein and lupin, which is part of the legume family—was about as close as you can get to the real thing.

"It's simulating an egg. That's what you can do. I'm not God, it's not at that level," Yehya said. "But we can get as close as possible, and as we continue developing our product, it will only get better."

Almost 10 years after California-based Beyond Meat launched its line of vegan meat substitutes and upended the food industry, there is no shortage of veggie burger patties, plant-based ground "meat," and simulated chicken fingers on grocery store shelves.

Recently, there have even been suggestions the market is oversaturated. Maple Leaf Foods CEO Michael McCain said earlier this month his company had seen a marked decline in sales of plant-based meat substitutions, such as Maple Leaf's Lightlife brand.

Still, with issues such as climate change and animal welfare increasingly top of mind for consumers, many companies believe the plant-based eating movement has plenty of room for growth. And for some, the perfect plant-based "egg"—a tricky product to develop but one which, if done right, could revolutionize not just breakfast, but a vast category of baked goods, snack foods and more—is the Holy Grail.

"We've been working on this for two years," said Yehya, whose family-owned company is based in Edmonton and launched Plant Eggz in late August, joining its existing line of vegan cheesecakes, cheese and meat substitutes.

"It's a large piece of the puzzle, and it's very innovative. We're the first Canadian company to do it."

According to market research company Expert Market Research, the global vegan egg substitute market could grow at a rate of 5.6% per year between 2021 and 2026, reaching a value of US$1.48 billion.

And as of yet, there aren't a lot of players. So far, San Francisco-based food tech startup Eat Just dominates the global liquid vegan egg market with Just Egg, which launched in 2018 and is made with mung beans. Just Egg arrived in Canada earlier this year and is available at a number of grocery chains, including Walmart and Loblaws.

U.K.-based food technology company Crackd has also developed a pea protein-based liquid egg product, which is available at M&S stores in that country.

In an email, Elissa Zaks, spokeswoman for the Egg Farmers of Canada, acknowledged there was market demand for plant-based alternatives. However, she said plant-based products "are not eggs" and don't provide the same amount of protein, iron and vitamins as chicken eggs.

"Consumers should know that nutritionally, these plant-based alternative products fall rather short of providing the same value," Zaks said.

Nabati Foods' Plant Eggz product are already available at Whole Foods in B.C. and Ontario, and at Sobeys in Quebec. The company went public on the Canadian Securities Exchange earlier this year, and built a food manufacturing plant in Edmonton that opened in the spring.

Yehya said the next goal was to expand into global markets. Nabati has already reached a deal with a European distributor, and some of its products can be found on store shelves in Hong Kong.

As a major producer of plant protein commodities like peas, soy, hemp, and chickpeas, Canada has the potential to be a world leader in the plant-based food space, said Tyler McCann, managing director of the Canadian Agri-Food Policy Institute.

That will open up opportunities not just for food tech companies like Nabati, but for farmers and processors too, McCann said.

"We need to be thinking in the context of supplying not just Canadian consumers, but consumers around the world," McCann said. "We need to find ways to grow companies that can be globally competitive."

But to do that, Canada needs to significantly build out its processing capacity, said Bill Gruell, president and CEO of Protein Industries Canada, a not-for-profit organization whose goal is to position this country as a global source of high-quality plant protein and plant-based products.

"We produce about 5 million metric tonnes of peas in Canada on an annual basis, and we process about 500,000 metric tonnes of peas," Gruell said. "What we want to do in Western Canada is build out the processing capacity here at home, so that we can support organizations like Nabati to buy the ingredients, the protein that they need for the products they're making here."

Up until now, Nabati Foods has sent the raw peas it uses in its products to China for processing, Yehya said. But as new processors come online, Yehya said Nabati is looking to switch to local, domestic suppliers.