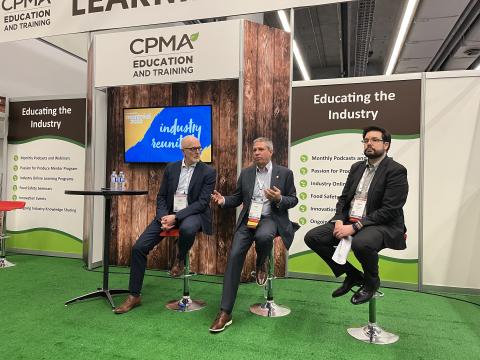 Adopting sustainable packaging practices in fresh produce continues to be top of mind for the industry to ensure long-term viability. At a panel discussion at last week’s CPMA Convention and Trade Show in Montreal, produce leaders talked about the future of sustainable packaging.

While plastics have received a bad reputation in recent years, eliminating them completely from the fresh produce sector is simply not a long-term sustainable solution, said Dan Duguay, a packaging specialist who has been working with CPMA for the last three years.

Duguay has helped the organization establish a series of roadmaps for sustainable packaging. And recently, CPMA was approved for two years of funding from Agriculture Agri-Food Canada to further develop sustainable strategies for food in Canada.

West Coast Produce is a wholesaler in Western Canada that services multiple markets, from urban centres to rural communities. According to Aaron Bregg, the company’s vice-president supply chain, feedback from the communities it serves is mixed, with some calling for more plastic (to increase product shelf life), while others want an end to single-use plastics altogether.

It’s a debate that Dan Branson, senior director, business and product development, Mucci Farms, said is often more complex than it needs to be.

“It's really apparent that consumers are very concerned about [sustainable packaging],” said Branson. “There's a potential negative impact to the environment on some of the choices that we're making. It's also a place where there has been a tremendous amount of confusion and we're building a roadmap from the starting point.”

Rather than trying to solve the packaging issue all at once, Branson said it’s more efficient to focus on areas where suppliers and retailers can make a real difference. “I shudder sometimes when I hear that we've got to get rid of plastics because of the negative sentiments towards plastics,” he said. “There are a lot of plastics that are actually very, very good materials. They're very sustainable materials. The problem is that we don't have the infrastructure to support them.”

An example of this dilemma goes back to replacing plastic bags with paper bags or reusable bags, which are often still created from polypropylene No. 5 plastics that cannot be recycled. “The sustainability outcome is not through just a choice of materials or not just through a choice of packaging design,” Branson added. “It's not just through putting pressure on the recycling system. It's all of those things.”

According to Branson, the produce department was the first area in grocery stores that transitioned out of expanded polystyrene and into PET, which is considered a high-value recyclable. “Instead of moving into black plastics where there was a concern, whether valid or not, we moved a lot of things into clear PET, which added value to that product coming out of the recycling stream and [getting] further use from it,” Branson said. Coming together on plastics and a baseline for packaging is all about creating efficiency in our industry, he said, adding this enables competitive advantages.

Packaging materials and design can be complex. For example, egg cartons or individual-sized yogurt containers may go in the recycling box in one city, but not the other. So, while certain components of packaging may be recyclable, if the consumer doesn’t dispose of it correctly, the effort is lost.

“Trying to recycle in any of our houses is a real challenge right now; trying to figure out which [package] goes where,” Branson explained, adding there’s a need to vastly simplify the materials used in the marketplace.

Duguay said despite government officials pushing the sustainability agenda, there are many other factors that need to be acknowledged first such as food safety, food availability and minimizing food waste. “What we're calling sort of the ‘packaging decision framework’ needs to be really well understood, because it's not just about the environment,” he said.

Cost is another major concern.“When you start thinking about the mass scale of adding five cents or 10 cents onto a tray of a product, and there are 500 million of those moved in market and we're trying to manage inflation across an economy, there's a pressure there that limits adoption,” said Branson.

The term “circular economy” is a key part of any sustainable packaging conversation. Essentially, it’s the process of taking existing packaging entering the recycling stream, processing and manipulating it into pellets, and then reintroducing it as packaging with a higher level of recycled content, and reusing it.

Currently, in Canada and globally, there’s a large amount of untapped recycled material that's being sent to landfill, which makes the idea of a circular economy even more attractive. While there’s no easy solution to migrate the entire produce sector onto sustainable packaging, both Duguay and Branson agreed the interest is there.

“I think it's probably one of the places that we really want go,” Branson said. “A limitation is we just don't have the infrastructure or the co-ordination across the different municipalities and provinces to be able to do that quite yet. To get to a circular economy, we've got to have the infrastructure that supports the process from beginning to end.”

“I think the current focus on recycling and a circular economy is going to remain the dominant desired end-of-life pathway for plastics,” Duguay added. “I think the produce industry is very well-positioned, and it could be a catalyst for this kind of change.”