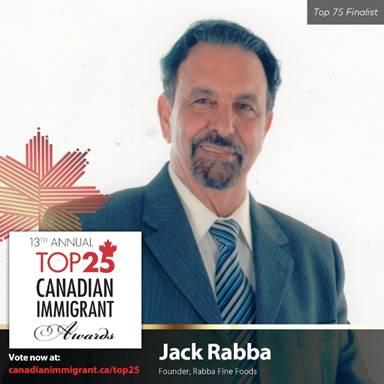 Rabba immigrated to Canada in 1966 and got a job at a restaurant, then a hotel and a convenience store. By 1967, Rabba had scraped together enough money to buy a convenience store at 37 Charles Street West downtown Toronto and called it Variety Food Fair.

Rabba grew the business, opening multiple locations across the city and in 1985 renamed the chain Rabba Fine Foods. Today the chain is comprised of 35 stores across the Greater Toronto Area.

The company gives back to the communities that support it through Rabba Roots Community program. It has hosted a Super Bowl event for Covenant House and Good Shepherd shelter for the homeless and vulnerable, and donated thousands of bottles of hand sanitizer to the Peel Children’s Aid Society.

“I am honoured by the recognition. Since setting foot on Canadian soil I’ve valued my adopted country’s openness, the rights it guarantees its people and the generosity and friendliness of all my fellow Canadians,” said Rabba in a press release.

“I’m happy to have had this opportunity to work hard and, over the years, to do my best to give back to my neighbours. If I can inspire one single immigrant to overcome the obstacles they will inevitably face, I would be overwhelmingly pleased,” he added.

The winners of this year’s Top 25 Canadian Immigrant Awards will be announced in November.