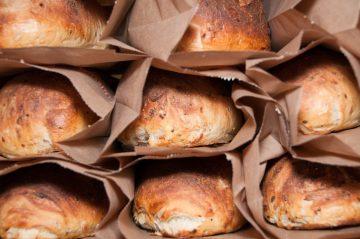 Until fairly recently, industry watchers had been flagging the decline of bread. Thanks to the popularity of keto diets and carbs being painted as nutritional bogeymen, sales were on a downward trajectory.

But in 2020, COVID-19 had consumers embracing bread in an unprecedented way. The early days of the pandemic saw shelves emptied as soon as they were filled and producers struggled to meet demand as customers loaded their pantries. Bread, it seems, is anything but dead, and all signs point to bright days ahead for the staple.

“Bread was in decline for a long time,” says Jo-Ann McArthur, president and chief strategist at Nourish Food Marketing. “But there has been a shift ... We’re back eating three square meals a day, often at home. In extraordinary times we reach for the ordinary. Bread is a comfort food.”

As has been well documented, during the pandemic, house-bound consumers took to baking bread in a big way, causing shortages of flour at grocery stores. But as McArthur notes, “If you look at Google Trends research, bread recipes peaked in April and they’ve trended downward ever since.”

Consumers, it seems, concluded that bread baking is not so easy and perhaps best left to professionals. They went back to purchasing bread at the store—and began buying much more of it than in recent years, the data confirms. Nielsen figures show prepackaged bread in Canada experienced a 6% bump in sales, reaching nearly $1.8 billion in the 52 weeks ending Jan. 2, 2021.

Along with sales growth, the way bread itself is defined has evolved. “It used to be flour, water, yeast or some other leavening agent,” explains McArthur. “Now, bread may be made with low GI flours, like those made from coconut or beans.” Consumers want bread, but better-for-you varieties are appearing in greater numbers including those that are gluten-free, made with clean ingredients, fortified with wellness-boosting seeds, sprouted grains and spices such as turmeric.

Millennials are also seeking new offerings—perhaps a revisit of interesting breads enjoyed at restaurants and on vacation (pre-pandemic, of course)—coupled with convenience. That has opened the door for par-baked and frozen loaves to grab a bigger slice of the market. Grocers with an on-site bakery have an edge, too, McArthur notes. “They can pivot quickly to respond to customer needs.”

Denninger’s, which has five grocery stores in southwest Ontario, has invested significantly in expanding its on-site baking capabilities over the last three years, and it has been paying off. “It has allowed us to grow our offering of European-inspired bread,” says Nathalie Coutayar, marketing and procurement manager. “There has been a tremendous increase in the demand for artisan varieties.”

The grocer’s bestsellers include light rye, sourdough and baguettes. The new year will see more innovation in Denninger’s bakery department, says Coutayar, noting it will be rolling out seasonal choices and sweeter breads made with fruit and nuts. Brioche is proving to be a hot variety. “We couldn’t even sell a single one a couple of years ago,” she says. “Now it’s our highest-growing category.”

At Toronto’s Summerhill Market, co-owner Christy McMullen is seeing similar trends with Summerhill’s own baked goods. Whole wheat and sourdough are leading the pack, along with challah. The retailer’s sales of English muffins, baguettes and crumpets have “skyrocketed” during the pandemic. “Customers are looking for denser breads made with high-quality, clean ingredients, plus gluten-free and vegan options.”

Bread sales are also being inspired by shoppers looking for comfort foods and nostalgia as they contend with COVID- 19. Furlani, operated by From the Hearth LLC, is enjoying success with its prepackaged garlic bread, which it says has seen a 13% rise in sales over the last year. “Now that Canadians, especially parents, are preparing multiple meals daily, they seek inspiration from food items that are quick and easy to prepare,” explains Jackie Brenkel, From the Hearth’s director of marketing, North America.

While some brands have been hesitant to launch new products, Furlani is charging ahead with new frozen and par- baked products in 2021, including soft dinner rolls (roasted garlic and cranberry honey), hand-tied knots, and biscuits made with butter and aged cheddar. They come in oven-ready bake-able bags and are ready in 10 minutes.

We can also expect the gluten-free category to gain more traction in 2021. As McArthur notes, it has a “health halo,” appealing those who are gluten intolerant as well as those who are not. Gluten-free bread consumers “want a quality bread with great taste, with a soft fluffy texture, slices big enough to make perfect sandwiches with and, more importantly, a bread with strong nutritional benefits, such as higher in fibre and lower in fat,” says Mohamed Safieddine, commercial director Canada, Promise Gluten Free. The company’s gluten-free bestsellers include soft white, multigrain, chia, quinoa and brioche.

While some companies are betting on gluten-free varieties, others are focusing on a shift away from chemicals and sugars, according to Dave Read, president of Toronto-based Rudolph’s Bakeries. The brand, established in 1951, experienced a wild ride in the early part of the pandemic. “We had a few weeks of hoarding-driven buying, followed by buying patterns so mixed it was difficult to stock shelves properly. By May, things settled with overall sales up by 10%.”

By December, with wave two of COVID underway, bread sales again spiked, says Danny Houghton, chief customer officer of B.C.-based Silver Hills Bakery. The difference was that companies knew how to respond this time and what to expect from customers, in terms of what they’re looking to eat. “People are becoming more mindful about what they’re putting in their bodies, wanting to make sure they’re eliminating or making buying choices that are not only helping potential underlying causes, shoring up their health.”

Sprouted grains add increased antioxidant capability, which can help protect against infection, chronic disease and inflammation, explains Houghton. Their popularity can be chalked up to an increased desire for functional foods. With that in mind, four new SKUs of Silver Hills sprouted breads hit the shelves recently: Farmer Fife (made with Canada’s oldest wheat variety), Oat So Lovely, Wheat & Greet with organic wheat berries, and seed-rich Full Seed Ahead.

Also new, the company’s Little Northern Bakehouse brand introduced three new SKUs of certified organic, gluten-free, plant-based loaves: Ancient Grain, Oatmeal and Original. And in October 2020 Silver Hills introduced a new brand, Carbonaut, a keto-friendly bread created with an artisanal flair and just two net carbs per slice. It was successful right out of the gate, Houghton says. “Every major retailer we showed it to in Canada said, ‘Yes, we want it. We’re listing it.’”

The bottom line? Much like yeast, bread sales—of all types—are on the rise.