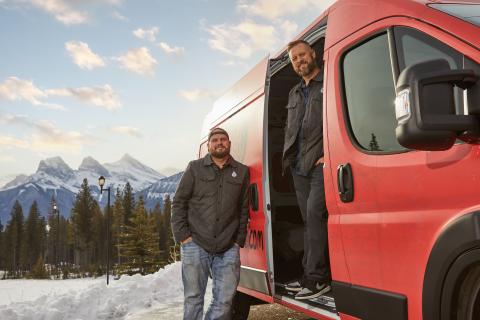 In 2012, Jamie Ayles had spent a decade working as a chef in Canmore, Alta. He was turning 30 years old and felt ready for a change.  “I had been in the industry for a long time,” Ayles recalls. “I had done everything that I wanted to do as a chef and in food and beverage.”

Ayles always wanted to be an entrepreneur, so he focused on how he could apply his years in kitchens to a business concept. He landed on the idea for a sauce and condiment company, which would come to be known as Bow Valley BBQ. “At the time, people were moving away from buying generic, cost-value-first products,” Ayles recalls. “It was an exciting time to try and evolve [the sauce and condiments category].”

Initially, Ayles rented the kitchen of the local Royal Canadian Legion after hours to develop his sauces. After receiving a government grant he was able to move to the Alberta Food Processing Development Centre. Ayles came up with a line of five products: Missing Link Spice Rub, Sweet Chili Corn Salsa, Bigfoot Bold BBQ Sauce, Blueberry Merlot Steak Sauce and Winged Buffalo Hot Sauce, and found success selling them at farmers markets and small retail shops. “I was going door-to-door to local grocers, wherever I could drive to regularly to service it,” he says.

Bow Valley BBQ soon caught the attention of Mary and Ernst Huerlimann, owners of the longstanding Canmore-based salad dressing company Boccalino Fine Foods. The Huerlimanns were selling their business because they were retiring. Since Boccalino was already stocked in grocery stores in Western Canada like Federated Co-op and Sobeys, Ayles saw the potential to take over an established brand and use those connections to grow his own sauce business. But he knew he’d need help running two businesses, so he reached out to Chris Dean, a fellow chef he had met back in 2001. “We had worked together for a few different places over about a 10-year period,” Ayles recalls. “I knew he was somebody I could trust.”

For Dean, Ayles reached out at the right time. He was at a similar crossroad as Ayles was facing earlier. Having worked in kitchens for two decades, by 2015 Dean was “looking for something different, something a little more static,” he says. The pair put in 70- to 80-hour workweeks as they transitioned to running two companies. “Every single bottle of dressing and barbecue sauce was made by Chris and me, and labelled and packaged and sent out,” Ayles explains.

The next stage was bringing in a co-packer to help the pair produce their growing lineup of products and to give Dean and Ayles more time to expand their business and retail connections. “Our strategy was: how do we start building relationships with the grocers to where we’re getting insights into what they’re thinking and what they’re looking for?” Ayles says. This led to the launch, (in 2016) of their private-label company, which they named Sauce Boss. The move saw the duo developing private-label sauces and dressings for several of Canada’s biggest and best-known grocers. “That allowed us to start getting much better communication with these major grocers without having to pay the big listing fees and real estate fees the big guys do,” says Ayles. Dean stepped into the role of product development, creating unique items like plant-based dressings.

Their next major milestone came in 2017 when they struck an investment deal with District Ventures Capital, the fund of famed Dragons’ Den investor Arlene Dickinson. “It made us focus on how to build a working scalable model,” says Ayles of the investment. From there, the company has grown 210%, on average, year-over-year. “We’re fully across Canada with almost all of the major grocers,” says Ayles. “We do business with Costco, Loblaws, Sobeys, Save-On-Foods, Co-op and we’re working on Metro right now.” They were on the brink of signing a co-packer in California to break into the United States when COVID hit. With inflation rising and supply chain issues, they’ve since put that expansion on hold and instead are entering a different market—beverages.

“We’re working with Park Distillery [in Banff, Alta.] to do a plant-based Caesar cocktail mix,” Ayles explains. They have a ready-to-drink version of the Caesar, with alcohol, launching across Canada and grocery stores later in 2022.

For Ayles and Dean, it’s been a whirlwind since hanging up their restaurant aprons. But there’s no looking back. “You kind of just wake up and you’re like, ‘wow, we’ve been in business [together] for five years,’” says Ayles. “We’re still making payroll and hiring people. It’s an exciting, huge change of mindset from that first stage of being terrified every day of fear of the unknown.”